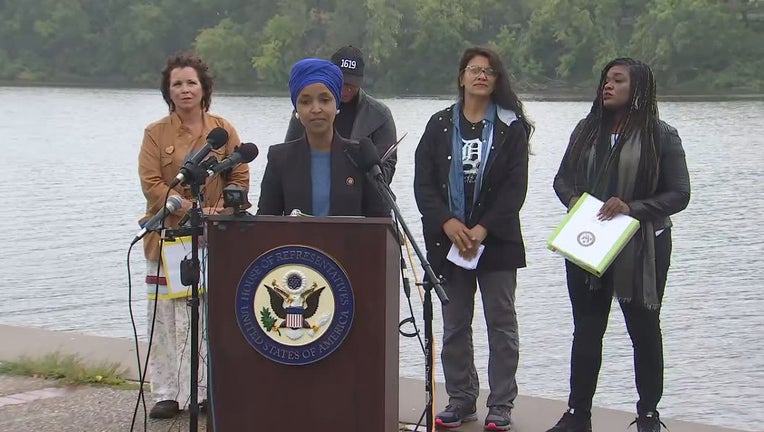 Rep. Ilhan Omar and members of "The Squad" speak in Minneapolis on the Line 3 project. (FOX 9)

MINNEAPOLIS (FOX 9) - U.S. Rep. Ilhan Omar and other Democratic congresswomen known as The Squad campaigned in Minneapolis on Friday for their last-ditch request that President Joe Biden stop construction of the Line 3 oil pipeline in northern Minnesota.

The Biden administration has shown little interest in stopping the project, which has cleared dozens of legal and regulatory hurdles and is now almost finished. Enbridge, the Canadian owner of the pipeline, says it'll start carrying crude oil later this year.

Rep. Ilhan Omar was joined by members of the Congressional group known as "The Squad" for a rally against the Line 3 project on Friday.

"Joe Biden promised to be the climate president. This is his opportunity to follow through," said Omar, D-Minneapolis, ahead of two days of scheduled protests.

Project supporters, including Republicans, some Iron Range Democrats, and union laborers, held a counterprogramming event at the state Capitol. They said the Democratic lawmakers were only in Minnesota to promote their own brands instead of the cause.

"(The project) is 90 percent done. This is going to happen. It’s time to get over it and move on," said state Rep. Dave Lislegard, DFL-Aurora.

Ahead of the Democratic congresswomen's visit, three Gov. Tim Walz commissioners wrote a Sept. 1 letter refuting concerns over the project. Opponents had made "false and misleading" assertions in their request to President Biden, the commissioners wrote.

Asked about the commissioners' letter, Omar said it was an attempt to "bully us."

Omar and the other Democratic lawmakers pointed to Enbridge's history of oil spills along the company's pipeline. Construction of the new Line 3 pipe has also not been without issue. Minnesota pollution control regulators have reported 28 releases of drilling fluid along the route.

An Enbridge spokeswoman said the company delivered nearly 4 billion barrels of oil in 2020 with its best safety record yet.

Republicans blasted the Democratic lawmakers for flying to Minnesota on airplanes to protest fossil fuel use.

When asked how they would travel to northern Minnesota for this weekend's events, Omar said "We’re going to be crawling. How about that?"

Enbridge told shippers this week that it expected to deliver oil through the new Line 3 in October, Reuters reported. When asked for comment, a company spokeswoman said only that the pipe would be in service sometime in the fourth quarter of 2021.