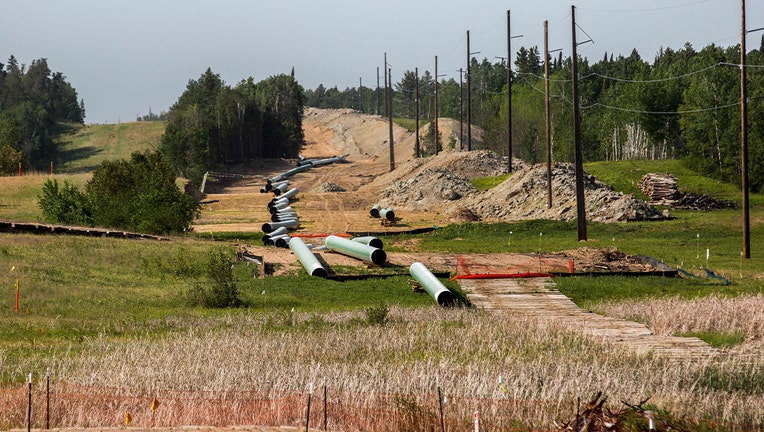 Sections of the Enbridge Line 3 pipeline are seen on the construction site in Park Rapids, Minnesota on June 6, 2021.  (Kerem Yucel / AFP / Getty Images)

(FOX 9) - The Minnesota Pollution Control Agency said there have been 28 inadvertent releases of drilling fluid at 12 river crossings along the Enbridge Line 3 pipeline project, more than the agency first reported.

The inadvertent releases were between June 8 and Aug. 5. One of the spills was into a river and 14 were into non-surface water areas. Thirteen of the spills were in wetlands, including one case, 6,000-9,000 gallons were released into a wetland 1/4 mile from the Mississippi River in Aitkin County, agency records show.

The Minnesota Pollution Control Agency said there have been 28 inadvertent releases of drilling fluid at 12 river crossings along the Enbridge Line 3 pipeline project, more than the agency first reported.

The 28 inadvertent drilling fluid releases are an increase from the nine MPCA initially reported in July.

In a letter to Minnesota lawmakers, the MPCA said it has opened an investigation into the releases of drilling fluid.

The MPCA describes drilling fluid as pressurized drilling mud, potentially mixed with additives, used to lubricate and cool the drill bit when drilling under rivers. The agency said inadvertent releases occur when drilling fluid escapes the bore hold and migrates through fractures in the soil or substrate.

Because inadvertent releases are a known risk during this type of drilling, the MPCA required Enbridge to include detailed plans on the potential incidents in its permit applications and have plans in place to clean up any spills.

The agency said it has placed additional requirements on the company throughout the construction of the pipeline, including increasing the number of independent environmental monitors and requiring the installation of preemptive sediment barriers at numerous river crossings to help clean up any inadvertent drilling fluid releases.

Enbridge spokesperson Juli Kellner said in an email to FOX 9 that in the majority of instances, the drilling fluid was contained entirely on land and cleaned up.

"In each instance the Minnesota Pollution Control Agency and the Minnesota Department of Natural Resources were also notified and cleanup was completed under the supervision of trained environmental inspectors and third-party agency monitors," Kellner said in a statement.

The replacement Line 3 pipeline would carry tar sands oil and regular crude oil from Canada across North Dakota and Minnesota to Wisconsin. Construction on the Minnesota section of the pipeline, the final leg of the project, began in December and is expected to finish up later this year.