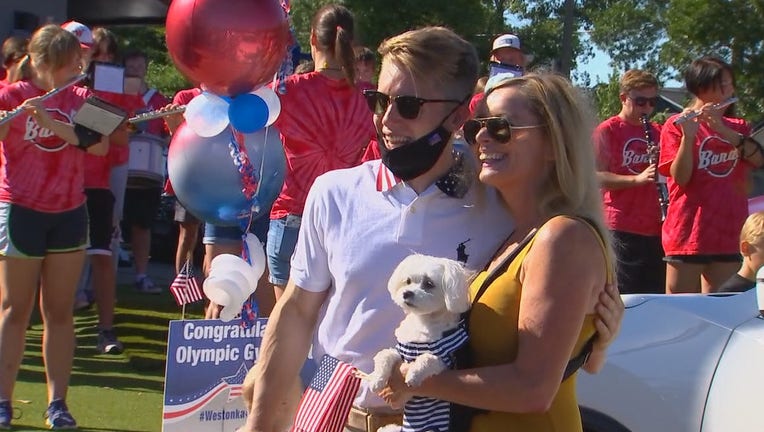 Olympic gymnast Shane Wiskus poses for a photo with a fan during his homecoming celebration in Spring Park, Minnesota from the Tokyo Games. (FOX 9)

SPRING PARK, Minn. (FOX 9) - Escorted by firefighters and police, it was a hero’s welcome for Olympic gymnast Shane Wiskus in his hometown.

"He's a local boy," said one attendee. "I don't know him personally, but people I go to church with know him and raised their kids with him."

Escorted by firefighters and police, it was a hero’s welcome for Olympic gymnast Shane Wiskus in his hometown.

A couple hundred people turned out at Back Channel Brewing in Spring Park to celebrate Wiskus' return from the Tokyo Games.

"It's cool," said Wiskus. "It makes me feel special, really shows me the love and support that I have from my family and friends back home."

Wiskus says even though there were no spectators and his family couldn't see him compete in-person, going to his first Olympics was a dream come true.

"That was the Olympic experience I've been dreaming about for my entire life," he said. "It was awesome. It was everything I hoped and dreamed for."

He says the U.S. men’s Olympic gymnastics team may have come in fifth place overall, but he and his teammates had a gold medal experience.

"I'm extremely proud of not only how we did, but how we carried ourselves throughout the meet and grateful for the experience with those guys," said Wiskus.

Wiskus says after a month-long break to relax and let his body recover, he'll start training to make another appearance at the Paris games in three years.

Even though some schools like his alma mater, the University of Minnesota, have cut their men’s gymnastics programs, Wiskus says aspiring Olympians shouldn't let that stop them from following their dreams.

"Do not let college gymnastics or an athletic director tell you, you can't do it," he said. "There are other ways, other avenues not just college."

In the meantime, Wiskus says he'll be thanking all the people who helped him reach his goal and basking in the Olympic afterglow.

"Just have fun," said Wiskus. "Shoot for the stars and have fun."