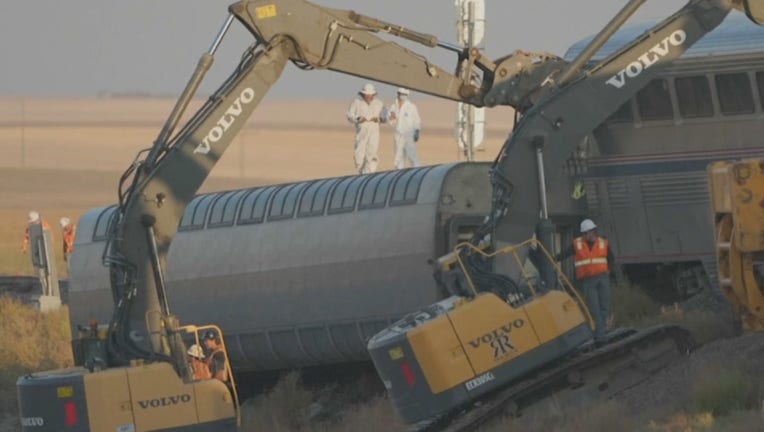 Crews respond to the Amtrak train derailment that killed three and injured several others in Montana.

(FOX 9) - The National Transportation Safety Board briefed reporters Monday in Montana as investigators try to figure out what went wrong with Amtrak’s westbound Empire Builder train over the weekend. Three people were killed and seven were injured in the derailment.

The train was traveling along its route from Chicago to Seattle – which includes a stop in St. Paul - when it left the tracks Saturday afternoon near Joplin.

The NTSB gave updates on the Amtrak train derailment that killed three and injured seven in Montana.

There were 141 passengers and 16 crew members on board.

NTSB Vice Chairman Bruce Landsberg said his investigative team has the train’s black box. They learned that the train was traveling between 75 and 78 mph at the time of the derailment in a zone with a speed limit of 79 mph.

"I went out and walked the track with some of our investigators…there is a lot of ground to cover. There is significant damage," Landsberg said.

Because of the derailment, Amtrak’s westbound service from St. Paul has been suspended for a few days, leaving some passengers stranded in the Twin Cities.

Jester Jersey said he slept by the gates Sunday night.

"I’m ready to get home, any way possible," he said.