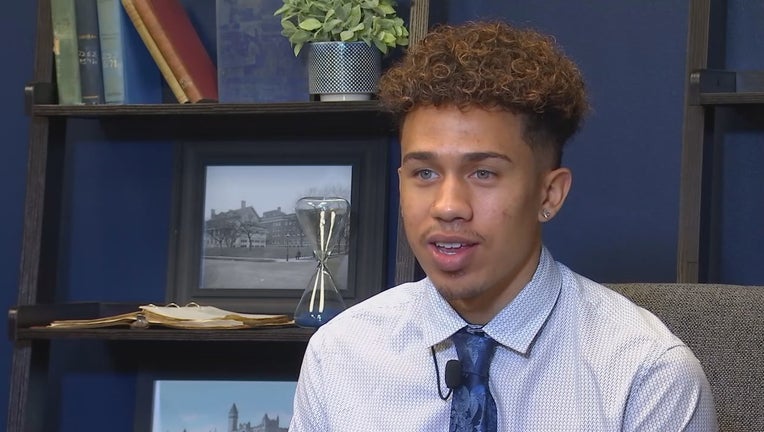 Derek Burgin, a freshman at North Central University, is the university's first recipient of the George Floyd Memorial Scholarship. (FOX 9)

MINNEAPOLIS (FOX 9) - North Central University in downtown Minneapolis will always have a strong connection to George Floyd and his family.

Days after his death, the school hosted a memorial service for Floyd, where they vowed to launch a scholarship in Floyd’s name, promising to give opportunities to future African-American leaders. Now, a young man with big aspirations has been named as the first scholarship winner.

Days after his death, the school hosted a memorial service for Floyd, where they vowed to launch a scholarship in Floyd’s name, promising to give opportunities to future African-American leaders. Now, a young man with big aspirations has been named as the first scholarship winner. &nbsp;

Derek Burgin is an on-the-go freshman at North Central University.

“I’m very energetic,” said Burgin. “I can’t sit down for more than an hour. I like to be moving constantly.”

As the very first recipient of the school’s George Floyd Memorial Scholarship, the young man of color says he is committed to making a difference in his community and beyond.

“The scholarship is significant to the United States and the rest of the world because it shows that it’s time for a change and it starts with the young people like me,” said Burgin.

North Central and its president, Scott Hagan, sought to do something special to help with the healing in the days following the death of George Floyd, who was held under the knee of a white Minneapolis police officer just a few miles from their downtown campus.

Floyd’s loved ones had reached out, wanting to host a small, family memorial service in the school’s sanctuary, but by then the whole world was watching. President Hagan and other university leaders had an idea - not just a George Floyd, full four-year scholarship on their campus, but on every campus, from coast-to-coast.

“I think the scholarship provided a way, almost accidentally to turn anguish into action and to see the future,” said Hagan.

Burgin explained that his family is financially challenged and he knew paying for his education at North Central University was not going to be easy. Now, the George Floyd Scholarship allows him to concentrate on his hopes and dreams, leading others along his path.

“We were scraping up money to even get me enrolled, like the enrollment deposit,” said Burgin. “We worried about housing and food and stuff like that. That was already a burden and to know my next four years was paid for, it was like wow!”

Burgin is majoring in psychology at the Christian liberal arts university with the idea of one day going into counseling and youth ministry. He was a three-sport athlete in Moline, Illinois, where he started a club that he called Minority Leaders of Tomorrow.

President Hagan recalled a special moment when the young man arrived on campus, earlier this fall.

“It was very emotional to meet Derek as he registered,” said Hagan. “It felt like just moments ago, we were all standing on that boulevard and the whole world was watching this anguish. And here we are with this beautiful way forward, this action toward the future. It was very meaningful.”

Since President Hagan’s scholarship challenge that first week of June, he says more than 50 additional colleges and universities have followed North Central’s lead with more than $50 million raised for endowments that will ensure opportunities for aspiring African-Americans are available for years to come.

Burgin promises to make the most of his.

“I’ve prepared myself for this moment and I’m ready to use it,” he said.