HOUSTON - Tropical Storm Nicholas weakened to a tropical depression early Tuesday evening after slowing to a crawl over southeastern Texas and southwestern Louisiana but still drenching the area with flooding rains.

The downgrade came the same day Nicholas blew ashore as a Category 1 hurricane, knocking out power to a half-million homes and businesses and dumping more than a foot (30.5 centimeters) of rain along the same area swamped by Hurricane Harvey in 2017.

Nicholas could potentially stall over storm-battered Louisiana and bring life-threatening floods across the Deep South over the coming days, forecasters said.

Nicholas made landfall early Tuesday on the eastern part of the Matagorda Peninsula and was soon downgraded to a tropical storm. As night approached Tuesday, its center was 60 miles (95 kilometers) east-northeast of Houston, with maximum winds of 35 mph (55 kph) as of 7 p.m. CDT Tuesday, according to the National Hurricane Center in Miami. However, weather radar showed the heaviest rain was over southwestern Louisiana, well east of the storm center.

Nicholas was the 14th named storm of the 2021 Atlantic hurricane season. It touched down on the eastern part of the Matagorda Peninsula and was about 30 miles southwest of Houston with maximum winds of 40 mph, according to the National Hurricane Center’s afternoon update.

Nicholas also dumped several inches of rain over part of Louisiana already saturated from Hurricane Ida with nowhere for the extra water to go. The storm was moving east-northeast at 7 mph, and the center was expected to move slowly over southeastern Texas on Tuesday and over southwestern Louisiana on Wednesday.

"Even as the storm returns to tropical storm status this morning, life threatening flash and urban flooding remains possible from far eastern Texas to the central Gulf Coast," the National Weather Service said.

The storm could dump up to 20 inches of rain in parts of southern Louisiana. Forecasters said southern Mississippi, southern Alabama and the western Florida Panhandle could see heavy rainfall as well.

The NHC said a tornado or two was possible into Tuesday night across southern Louisiana. 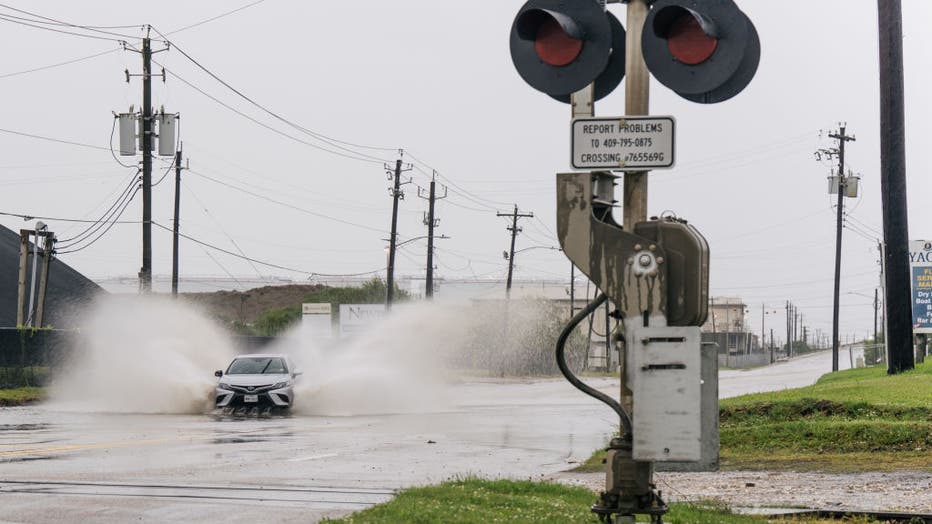 GALVESTON, TEXAS - SEPTEMBER 13: A car speeds through a flooded street ahead of Tropical Storm Nicholas on September 13, 2021, in Galveston, Texas. (Photo by Brandon Bell/Getty Images)

In southeast Texas, more than 500,000 homes and businesses had lost power at one point — but the number dropped to about 375,000 by Tuesday afternoon, according to the website poweroutage.us that tracks utility reports.

Most of those outages were caused by powerful winds as the storm moved through overnight, utility officials said. Across Louisiana, about 100,000 customers remained without power Tuesday midday.

In Houston, officials worried that heavy rain could inundate streets and flood homes. Authorities deployed high-water rescue vehicles throughout the city and erected barricades at more than 40 locations that tend to flood, Mayor Sylvester Turner said.

"This city is very resilient. We know what we need to do. We know about preparing," said Turner, referencing four major flood events that have hit the Houston area in recent years, including devastating damage from Hurricane Harvey in 2017.

Numerous school districts along the Texas Gulf Coast canceled classes on Monday and Tuesday because of the storm, including the state’s largest in Houston. The weather threat also closed multiple COVID-19 testing and vaccination sites in the Houston and Corpus Christi areas and forced the cancellation of a Harry Styles concert scheduled for Monday evening.

Nicholas has been downgraded to a tropical storm hours after making landfall along the Texas coast as a Category 1 hurricane. Nicholas made landfall around 12:30 a.m. Tuesday on the eastern part of the Matagorda Peninsula, about 10 miles west-southwest of Sargent, with maximum sustained winds at 75 mph. According to the NHC, Nicholas is moving north-northeast around 9 mph and is expected to move more slowly to the northeast later Tuesday. It is expected to move eastward over Louisiana by Wednesday.

Nicholas brought rain to the same area of Texas that was hit hard by Harvey. That storm made landfall in the middle Texas coast then stalled for four days, dropping more than 60 inches of rain in parts of southeast Texas. Harvey was blamed for at least 68 deaths, including 36 in the Houston area.

After Harvey, voters approved the issuance of $2.5 billion in bonds to fund flood-control projects, including the widening of bayous. The 181 projects designed to mitigate damage from future storms are at different stages of completion.

But University of Miami hurricane researcher Brian McNoldy said he expects that Nicholas "will be magnitudes less than Harvey in every regard."