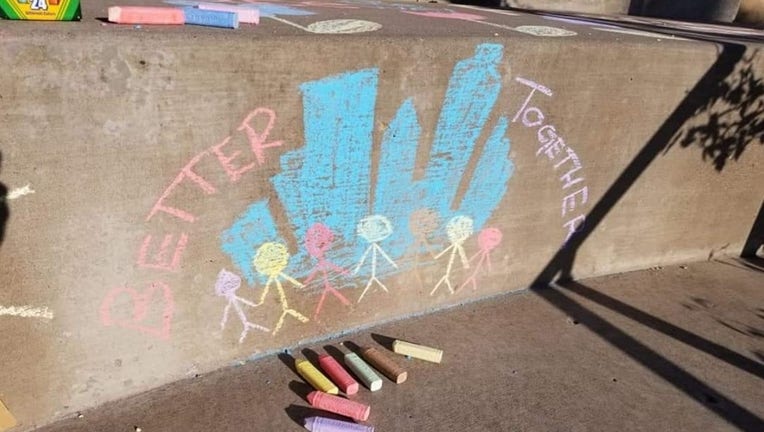 Chalk messages, murals and political flags are no longer allowed on city-owned property in Anoka, Minnesota.

Brittney Maki believes a chalk mural she drew last year played a part in the city council's decision to approve the new ordinance.

Taking to the sidewalks and steps on the city last June, Maki says she wanted to spread positivity, not politics, following the death of George Floyd and widespread civil unrest. Her mural included messages of support, and drawings of Floyd, as well as children's television host Mr. Rogers.

She called it artwork, but city staff said it was graffiti. The new ordinance banning such murals was passed in a 4-1 vote earlier this month.

"There were a lot of cities that got requests to fly the rainbow flag for Gay Pride Month, and also over the last year or two, there's been requests for flying the 'Black Lives Matter' flag," said Lee.

The ordinance allows for some "governmental expression" exceptions, like banners commemorating holidays or city events, and flags representing branches of the U.S. Military.

"Our intent is to try and keep the city of Anoka neutral from any political influences and having a third party using our city as a venue to get their message across," said Lee.

Erik Skogquist was the only council member to vote against the change.

"I'm happy I voted against this. I'm just kind of embarrassed the city had to get to this point," said Skogquist.

He thinks the ordinance is too broad and far-reaching because it technically makes it against the law for kids to draw on city-owned sidewalks with chalk.