On the first day of a strike that saw teachers begin to form picket lines outside district buildings, Minneapolis Public Schools (MPS) officials provided a grim update on the current state of negotiations. While most of its teachers have decided to strike and form picket lines, some are still returning to work.

MINNEAPOLIS (FOX 9) - On the first day of a strike that saw teachers begin to form picket lines outside district buildings, Minneapolis Public Schools (MPS) officials provided a grim update on the current state of negotiations.

At a press conference held at 3:30 p.m. Wednesday superintendent Ed Graff said that despite round-the-lock efforts to negotiate, the Minneapolis Federation of Teachers and district remain at odds with their different proposals.

"We do have shared values – that’s very apparent to me, board members and the public. Unfortunately, the reality is we’re resource-limited," Graff said. "The finances we have are not enough to provide the support we need to provide."

Both Minneapolis and St. Paul district teachers have essentially stated similar demands: better pay and working conditions for teachers and support staff, smaller class sizes, and further mental health support for students. Similarly, both districts have said they agree the demands are warranted, but don’t have the money to pay for them – American Rescue Plan funds were one-time payments that likely won’t come again, and each district claims to be harboring an annual budget deficit.

Well into Monday night an announcement from the St. Paul Federation of Educators said they had reached a tentative agreement with the St. Paul Public Schools district, avoiding a strike with only hours remaining.

For MPS mediations began last December, according to Graff, but the distance between budget projections and teachers' demands remains wide.

"We do our best to make sure we’re good stewards of our money. We have school-based mental health clinics at every one of our schools in the district, and it’s not enough. We all have priorities we want to have happen, but we don’t have to the resources for it. Someone has to be able to say ‘sorry I can’t do it,’" said Graff.

Answering questions from reporters, Graff noted both sides have "moved" and made compromises. 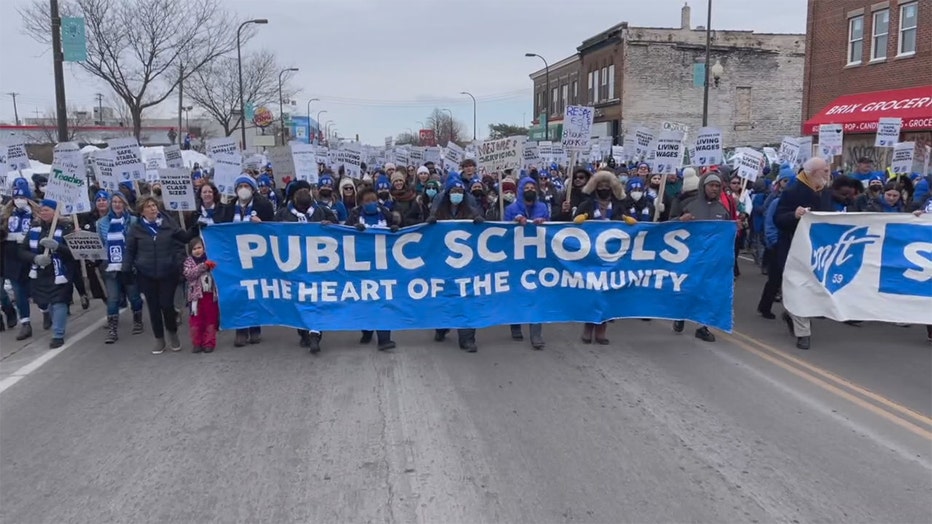 MPS teachers marched and formed picket lines on Tuesday, Mar. 8, as part of a strike for increased wages and support.

"We’re going to have to invest in our employees, we know that," Graff said. "But the only way we’re going to be able to sustain that is increased revenue. You either have to increase revenue, or decrease expenses – those are the two options."

Admittedly, "frustrated, sad, disappointed and concerned," with the state of negotiations, Graff said he wants educators to know he values and respects what they do.

"My ask is that we get to the negotiating table and negotiate in good faith so we can get this figured out as soon as possible," said Graff. "The best place for kids is in school."

While the majority of its teaching body are striking, Minneapolis Public Schools says there are around 300 educators choosing not to join the picket lines.

"To me, the strike just isn’t the right way to go about this," said Jessie Begert, the parent of two students in the district and a teacher at Hall STEM academy in North Minneapolis. "I’ve already been called a ‘scab’ and I’m OK with that."

Begert is choosing not to strike and instead reported to her school on Tuesday to work on cleaning and other organizational projects. She says she’s worried the strike will cause more harm to students than good, especially the most underserved students and families that don’t have access to other childcare options.

Begert says she also doesn’t believe some of the demands the union is striking over directly benefit students. She says the act of the strike doesn’t center student’s best interest and that the union’s demands are unrealistic.

"I also don’t think the funding the union is asking for is there. I think there’s a lot of misinformation that’s come out about money that the district is withholding, and I think when you really look at the budget and knowing that it’s looked at by third parties and really looked at with a fine-tooth comb, the money just isn’t there for the teacher increases in pay that they want," Begert said.