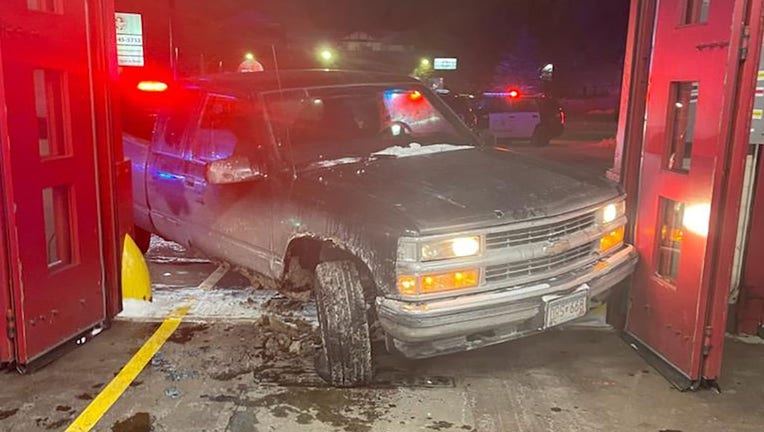 Minneapolis police officers arrested a man after firefighters detained him for following a woman and crashing his truck into the fire station Thursday night.

MINNEAPOLIS (FOX 9) - Firefighters helped protect a woman who went to the fire station after a man driving a truck refused to stop following her and crashed into the station on Thursday night, the Minneapolis Police Department says.

The woman arrived to the Whittier neighborhood fire station Thursday evening, attempting to get away from a man she knew who wouldn't stop following her, according to Minneapolis police officer Garrett Parten. Officer Parten could not clarify the woman and man's relationship, except that they knew each other, since the incident is still under investigation.

As the man drove his truck up the driveway, firefighters placed themselves between the truck and the woman and asked the man to leave. Police say the man continued to slowly drive closer to the woman, and that's when firefighters opened the bay doors to try to get the woman to safety inside the station.

Minneapolis firefighters defend themselves from attacker after woman seeks refuge

"We had to hold legs, arms, and he fought us the whole time:" Minneapolis firefighters recall the night they restrained a man after he rammed his truck into the station to attack a woman they were protecting.

MORE: Firefighters recount night they defended themselves from attacker after woman seeks refuge

The man attempted to drive past the firefighters and crashed into the station's open bi-fold bay doors. Firefighters then punctured a tire to stop the truck and detained the man until police came, according to preliminary information from MPD.

When officers arrived around 7:15 p.m., MPD says they saw a pick-up truck "nosed up" against the station's open bay doors and found firefighters detaining the man.

Police took the man into custody at Hennepin County Jail, where they say he awaits charges for second-degree assault. UPDATE: 32-year-old Shawn Coates was charged on Friday with two counts of fourth-degree assault and one count each of threats of violence and third-degree criminal property damage in this incident. Read more on those charges here.

Neither the woman nor firefighters were injured during the incident.