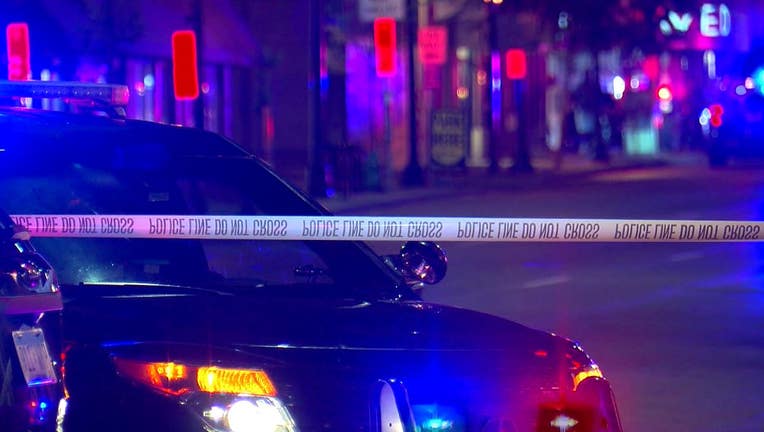 Police investigate after 11 were injured and 1 was killed in a shooting Sunday in Uptown Minneapolis.

MINNEAPOLIS (FOX 9) - Police are investigating a spike in shootings over the weekend, one of which left 11 people wounded in Uptown Minneapolis.

Police are investigating another deadly shooting in Minneapolis after a violent weekend in the city.

According to police, at 9:45 p.m. Friday, police learned that two victims showed up at North Memorial Medical Center with non-life threatening gunshot wounds. The shooting is believed to have happened on the 700 block of West Broadway Avenue in Minneapolis.

At 11:25 p.m., officers responded to a report of a shooting on the 3800 block of Chicago Avenue South. When they arrived, officers were told that a man shot himself and bystanders were performing CPR. Police said officers responded to provide aid to the victim, but "encountered some instances where crowds are hostile and impeding with officer’s lawful duties."

The victim was transported to the hospital where he later died.

Also at 11:25 p.m., police responded to a report of multiple people shot in the area of 54th Street East and 28th Avenue South. When they arrived, officers found two people suffering from non-life threatening gunshot wounds. Police said that as officers dealt with the scene, the scene became hostile towards police. Additional officers were called in for support.

The victims were transported to the hospital. A man was arrested, and a gun was recovered at the scene.

Two victims are expected to recover after a double shooting in north Minneapolis on Saturday.

According to the Minneapolis Police Department, officers were on the 600 block of 21st Avenue North around 4:40 p.m. when a man approached them saying he had been shot. Police believe the shooting took place on the 700 block of West Broadway Avenue.

Officers called for an ambulance that had already been heading towards the scene and helped get the victim to the EMTs. Around the same time, a second victim in the shooting showed up at the hospital. Officers say both victims are expected to survive their injuries.

The investigation into the shooting is ongoing. No arrests have been made at this time.

According to police, at 12:37 a.m., multiple 911 calls came in reporting multiple people shot on the 2900 block of Hennepin Avenue South.

When officers arrived, they located several people suffering from gunshot wounds. Several were transported to the hospital, while others had been taken to the hospital via private vehicle.

Around the same time, Minneapolis Police confirmed Tuesday that another man, a popular barber, was killed by two gunshots after a fight near Target Center downtown.

At about 1 a.m. Sunday, staff from North Memorial Medical Center called to report a man came in with a non-life threatening gunshot wound. An officer responded and spoke with the victim who stated the incident happened at East Lake Street and Bloomington Avenue.

At 3:35 a.m., an officer in the parking lot of the 4th Precinct heard multiple gunshots. Officers ran toward the sound of gunshots and found a man suffering from a gunshot wound. He was transported to the hospital where he is in critical condition. The suspects fled before officers arrived.

At 3:42 a.m., dispatched was notified by North Memorial Medical Center staff that two men came into the ER with non-life threatening gunshot wounds. Officers spoke with the victims and are working to determine where the shooting took place. The case is still under investigation.

Sunday evening, Minneapolis Police responded to another deadly shooting in the Jordan neighborhood that left at least one dead.

Last weekend, six people were wounded and one person was killed in a shooting on West Broadway Avenue.