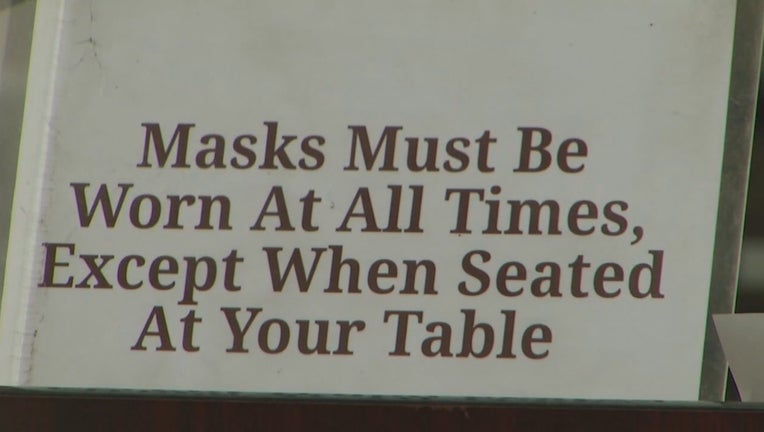 FOX 9 - In public spaces across the nation, even in the Twin Cities, there’s a push to mask the unmasked.

Health leaders like Dr. Anthony Fauci are sounding the alarm to Congress. The likelihood of wearing masks has fallen sharply along lines of political affiliation.

In public spaces across the nation, even in the Twin Cities, there’s a push to mask the unmasked.

The latest Pew Research polls show people who identify as Democrats were significantly more likely to wear masks in stores and in public than those who lean Republican.

Vice President Mike Pence violated Mayo Clinic’s policy by not wearing a mask during a visit in April. He later said he was wrong, but the nation’s governors this week pressured him for the White House to lead by example.

“And I was on with the Vice President this morning where governors were asking them that you could change the trajectory of this if you and president would wear a mask, and tell people to wear a mask,” said Minnesota Governor Tim Walz in a press conference on Monday.

Since that call, the vice president has publically worn a mask at all of his appearances.

“Wearing a mask is just a good idea, and it will—we know from experience—will slow the spread,” said Pence.

Republican leaders are jumping on board. Former Minnesota Governor Tim Pawlenty tweeted, “In our sadly divided country, let’s at least show we care about each other to wear our masks in crowded places.”

Congresswoman Liz Cheney, who represents Wyoming and is the daughter of former Vice President Dick Cheney, tweeted that her father “says wear a mask.”

Senate Majority Leader Mitch McConnell is also encouraging others to mask up.

“We must have no stigma,” said McConnell. “None, about wearing masks we leave our homes and come near other people.”

President Donald Trump has not worn a mask in public. His press secretary says he doesn’t need to because he’s tested regularly. In an interview with FOX Business, Trump says he has put on a mask and that he looked like the Lone Ranger and thought he looked good.

All of this coming on the eve of a holiday weekend when Minnesota health experts are telling people to stay home with family.

“But we need to remind Minnesotans that we need to be in a new normal and to continue to stay vigilant this weekend to protect ourselves and our loved and indeed our entire community,” said Minnesota Department of Health Commissioner Jan Malcolm.