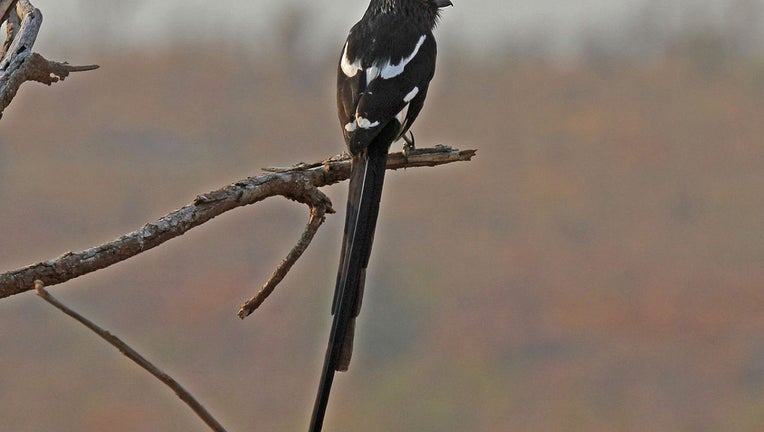 Pictured is a magpie shrike, also known as the African long-tailed shrike. (Photo courtesy of the Minnesota Zoo)

APPLE VALLEY, Minn. (FOX 9) - The Minnesota Zoo is asking for birdwatchers to keep an eye on the sky after four magpie shrikes escaped from their enclosure in July.

A zoo spokesperson said four magpie shrikes, also known as the African long-tailed shrike, flew out of the zoo last month after a door had been left open. One of the four birds was found and returned safely to its habitat.

The magpie shrikes are free-flight birds located in the Tropic Trail aviary. The birds have a short body, white patches on their shoulders and wings, and a long floppy tail, the zoo spokesperson said.

"The birds are in no way considered a threat to Minnesota’s ecosystem and are part of an all-female group that will be unable to reproduce," the spokesperson said.

The Minnesota Zoo has informed local and national zoological and wildlife partners of the missing birds. The zoo has also been working with the Twin Cities birding community to help identify and locate the remaining three missing magpie shrikes.

If you have any information about the magpie shrikes or believe you’ve spotted them, please call the Minnesota Zoo at 952-431-9200.