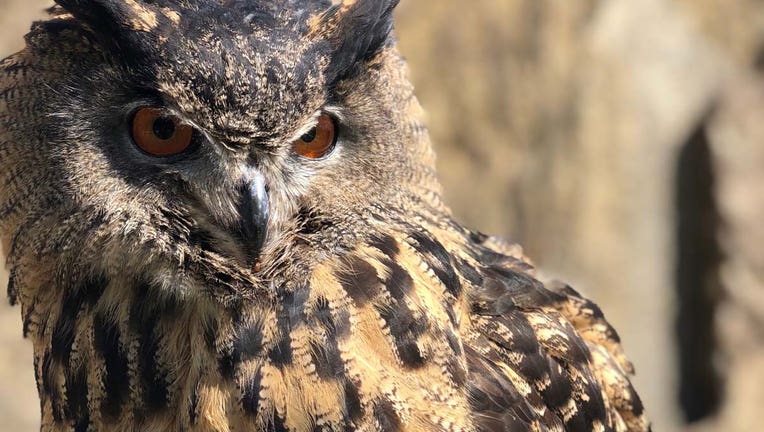 APPLE VALLEY, Minn. (FOX 9) - The Minnesota Zoo is searching its grounds and alerting neighbors in Apple Valley that its Eurasian eagle owl, named Gladys, is missing.

Tony Fisher, the zoo’s Director of Animal Collections, said the five-year-old owl got loose during a routine training session on Oct. 1. Staff have been tracking Gladys around the zoo and believe she is likely to be within the 485-acre, forested zoo grounds.

"She flew off to a tree and decided she didn’t want to come back," he said. "She eats rabbits and mice and on down, so she’s probably out there doing that."

Gladys is smaller than a bald eagle but twice the size of a great horned owl. She also has a wingspan of about six feet.

In fact, the Eurasian eagle owl is the largest owl in the world. Zoo officials said Gladys does not pose a threat to public safety.

For days, staff tracked the bird hanging out near the zoo, but now it’s been some time without any sightings.

In the meantime, residents like John Derosa are keeping an eye out.

"It would be a magical sight to see… it’s like Harry Potter," he said.

If you are certain you’ve spotted Gladys, call 911 or call the zoo. Or, take a picture and send it to the zoo.

"We’ll check out all the leads and see if it could be Gladys," Fisher said. "She’s been a star of a bird show for a number of years and we’d kind of like to get her back."