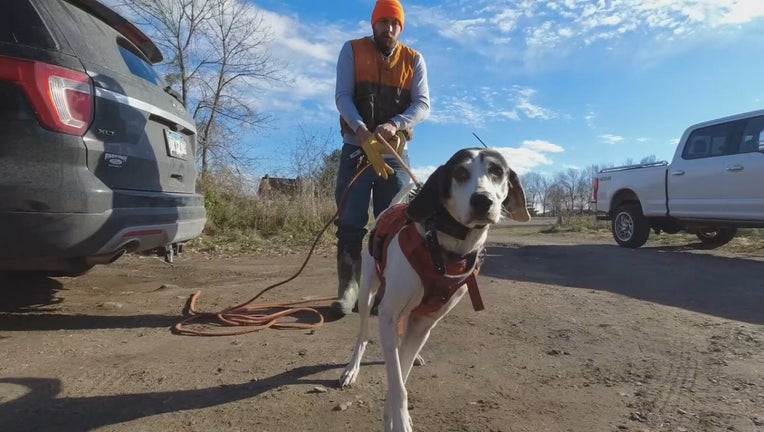 Dog owners with specially trained dogs are providing a in-demand service for hunters in Minnesota.

STILLWATER, Minn. (FOX 9) - As we head into the second half of Minnesota's firearm deer season, there is a growing group of dog owners who are becoming very popular.

On Wednesday, we met with Bailey, a five-year-old tree walker coonhound, in a field near Stillwater, on a mission -- albeit for practice – looking for deer.

As we head into the second half of Minnesota's firearm deer season, there is a growing group of dog owners who are becoming very popular.

"And there’s our target," explained David Little, Bailey's owner. "She’s looking for a whole deer, but in the end, that’s our target."

Bailey’s owner, David Little, leads a growing group of Minnesotans who along with their care and specially-trained dogs become very, very busy every deer season.

Shane Simpson also helps lead the group and has an avid following on YouTube, highlighting his success stories. What they do is find deer that hunters who have shot them simply cannot. It is a service certainly in demand.

"It gets rough and it’s demanding depending on how the tracks go, I’ve done four and five, I think six one time," added Simpson.

The group is called "Minnesota Tracking Dogs". Their Facebook page directs hunters to a map and growing list of trackers across the state.

"A network of independent like-minded people and we network together to try to get all the tracks covered that we can," explained Little.

Using leashed dogs to find wounded deer became legal in Minnesota two years ago and almost any dog can be trained to do it. Because they’re not following the blood, they’re trained using deer hooves.

"This makes it a lot easier to lay down that scent trail," added Simpson.

So the dogs learn to follow a specific scent, unique to each deer and the odors distinctive to wounded deer.

"The very first year I was involved, I’d say I got maybe 50 calls all season and I’d say I got 50 calls on the opening weekend of firearms season this year," said Little.

The track can take minutes or hours they say their success rate is about 50-percent. However, those successes lead to some very happy hunters.

"He was pretty elated, you’re talking this is a big fellow, and he gave me a big old bear hug when I found it," said Simpson.