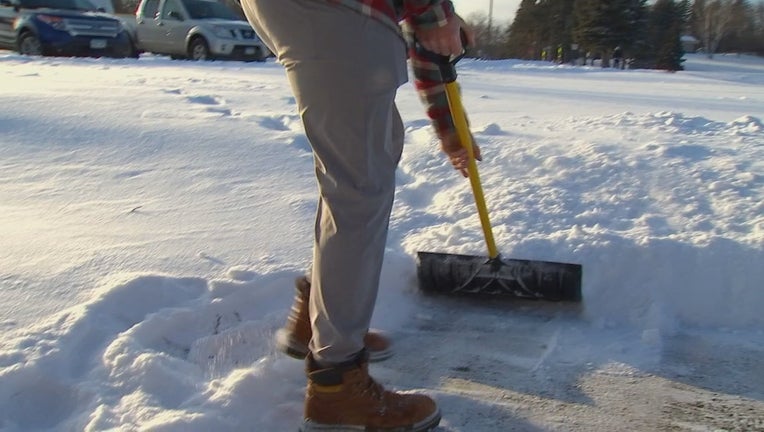 Teens and others are using an app to connect with snow shoveling jobs. (FOX 9)

Where others may see white, he sees green. The high school student is making a lot of money by shoveling snow.

Seventeen-year-old Ben Tousignant is taking advantage of the recent snowstorms.

He said finding a job as a student and athlete has been tough during the pandemic.

"With everything getting pushed back, you don’t really know your schedule, which makes it hard for business owners to want to hire you," he added.

Tousignant is part of a growing number of people joining the gig economy.

According to the U.S. Labor Statistics, the gig economy is described as work that involves a single task in which workers may be hired for on-demand jobs such as shoveling snow.

Shovler works like other gig job apps, allowing you to hire someone to shovel snow, or find snow shoveling jobs in the area. Snow shovelers are hired to remove snow from driveways, sidewalks, or even a car parked on a city street. Prices are adjusted based on the amount of snowfall in your area.

Miller said Minnesota is booming in the shoveling snow business.

"Minnesota happens to be one of our major markets," he added.  "Just today, we’re doing hundreds of jobs throughout the state."

That’s good news for students, like Tousignant, who said he’s already made a few hundred dollars and making his own hours by doing the hard work no one else wants to do.

"It goes quick," he said. "It’s not you working an eight-hour shift and sitting there all day. You still got the rest of the day to enjoy."

The Bureau of Labor Statistics reports that nearly 55 million people are in the gig economy here in the US and that number is expected to grow by more than 40 percent within the next year.