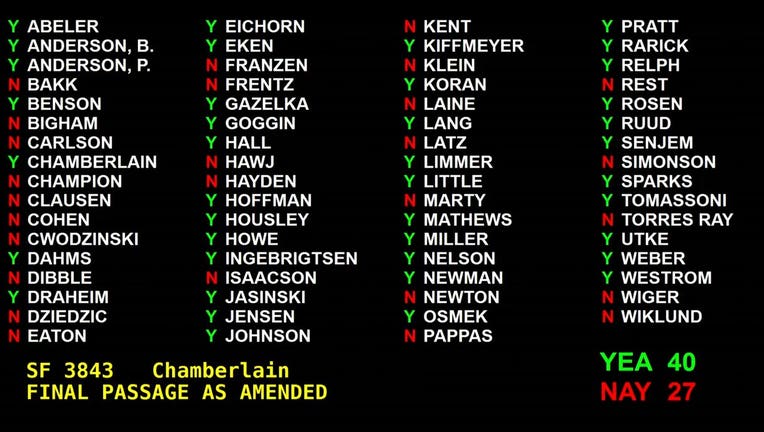 Minnesota Senate passes GOP-backed bill that gives tax breaks to businesses, including a delay on property taxes due May 15. The vote was 40-27; some Democrats joined Republicans in voting yes. The bill faces an uncertain future in the House.

ST. PAUL, Minn. (FOX 9) - The Minnesota Senate approved more than $1 billion in tax breaks Thursday as the state's divided Legislature is at odds over how to respond to the economic fallout caused by the coronavirus pandemic.

The biggest piece of the Senate's package allows businesses to delay their next round of property tax payments, currently due May 15, until July 15. The bill also provides breaks to business investors, people who donate in excess of $300 to charities, and families to pay education-related expenses.

The vote was 40-27, and some Democrats joined Republicans in casting yes votes. But resistance came from other DFL senators who said the state budget could not sustain the hit, as unemployment and lost business revenue batters the Minnesota economy and tax collections.

"My no vote isn’t because there aren’t some nice things in there, it’s that we don’t have money to do nice things right now," said state Sen. Tom Bakk, DFL-Cook. "We’re handing off to the next Legislature a mammoth problem."

"All you want to do is torpedo everything because it’s political," said Chamberlain, R-Lino Lakes. "Me and people who support this bill say we’re going to fight and get us back on our feet. We’re not going to lay in bed and whine and complain and say it’s too cold and too dark and too scary."

The state Revenue Department estimated that the state would lose $1 billion in tax collections this year from Chamberlain's bill, mostly because of the deferred business property tax payments. But roughly three-quarters of that lost revenue would be made up in the next fiscal year, analysts said.

The bill faces an uncertain future in the DFL-controlled House over the final three weeks of the 2020 session.

Democrats who control that chamber have their own economic relief package. It includes $100 million in assistance for renters, pay for hourly school workers, wage increases for personal care attendants, and cash assistance to Minnesota families on welfare.

On Tuesday, state officials plan to give a rare update to their February budget forecast, which had projected a $1.5 billion projected surplus. The surplus has likely evaporated because of the rapidly contracting economy, they have said.