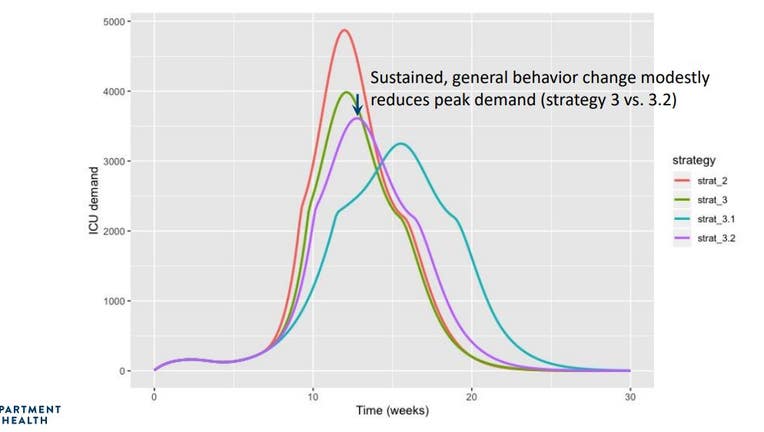 ST. PAUL, Minn. (FOX 9) - Minnesota public health officials revealed some details Friday about their modeling projections for the coronavirus pandemic here, predicting that 22,000 Minnesotans would die despite social distancing measures that have been put in place.

The modeling, which has been kept under wraps until now, was revealed to reporters and legislative leaders in separate briefings after journalists had requested for weeks to see it.

Minnesota public health officials revealed some details Friday about their modeling projections for the coronavirus pandemic here, predicting that 22,000 Minnesotans would die despite social distancing measures that have been put in place.

Researchers from the Minnesota Department of Health and University of Minnesota modeled six scenarios, ranging from no mitigation efforts to permanent social distancing efforts. The fourth scenario, which most closely reflects the extended stay-home order that Gov. Tim Walz has implemented, suggests a July 13 hospitalization peak requiring 3,700 intensive care beds.

"This is one of many data points," Health Commissioner Jan Malcolm told reporters. "The other thing we’re looking very closely at is what the hospitals themselves are telling us about their capacity. Their confidence level in how quickly they can add capacity their own models, as the governor has said, are much more pessimistic than this one."

The model Minnesota is using to set the policy to combat the coronavirus contrast to the model federal leaders are using.

Minnesota's modeling paints a much more dire picture than another widely discussed model from the University of Washington, which projects an April 26 peak and 442 deaths in Minnesota.

The major differences have led some Minnesota lawmakers to call on Walz to end his stay-home order. Senate Majority Leader Paul Gazelka said Minnesotans should be allowed to return to work while the state imposes sheltering requirements on people over the age of 70.

As of Friday, 57 Minnesotans have died from the coronavirus with another 64 in the hospital, the majority of whom are over the age of 70.

But Stefan Gildemeister, an economist with the state health department, said the Washington model was too optimistic because it only forecasts until August and doesn't take into consideration potential second and third infection peaks. Minnesota's model forecasts out 16 months.

"We could spend an hour on why that model is different from Minnesota’s model and why we think, though the researchers are as bright as our team, they have made some incredibly optimistic assumptions," Gildemeister said.

The Minnesota model predicts more deaths in this state than the University of Washington model projects for New York, where the U.S. pandemic is centered.

"We have to help people understand, this is not a one-time event," she said. "This is not, you hit the peak and everything goes back to normal. This is going to be with us in challenging ways in multiple ways until there are treatments and a vaccine and this is just the hard reality."

Health officials said they aimed to release their "model interface and code" publicly by late April.

After the officials did their virtual news conference with reporters, they briefed legislative leaders from both parties via video conference.

Several rank-and-file Republican lawmakers complained on social media that the briefings were not being streamed so they could watch them. But Gazelka said he was getting briefed Friday, and he said that state Sen. Michelle Benson, chair of the Senate's health and human services committee, had been given the information Thursday afternoon.

Since March 16, 409,574 Minnesotans have filed for unemployment, representing 13.1 percent of the state's workforce.

Walz did not participate in a news conference with reporters Friday, the first weekday in recent memory that he did not do so. The governor was observing Good Friday with his family, a spokesman said.