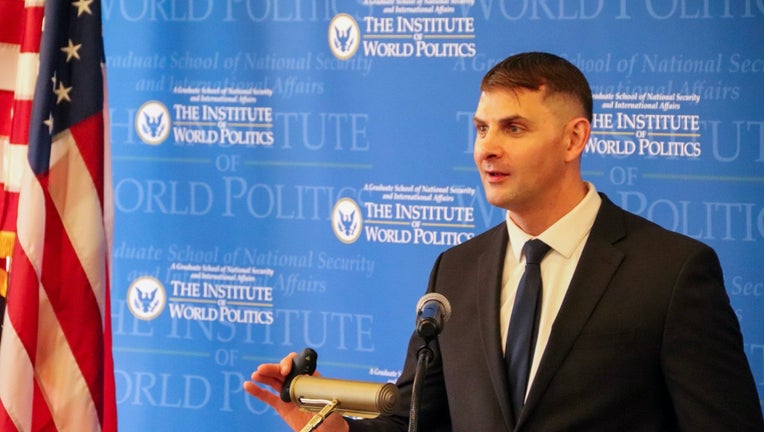 (FOX 9) - Peter Debbins was born and raised in Minnesota, but according to an unsealed federal indictment, the former Green Beret has been talking to Russian intelligence agents for 20 years, had a secret code name, and considered himself a "son of Russia."

Debbins, 45, was arrested Friday in Gainsville, Virginia, and is charged with espionage.

Peter Debbins was born and raised in Minnesota, but according to an unsealed federal indictment, the former Green Beret has been talking to Russian intelligence agents for 20 years, had a secret code name,

Debbins was born in Minnesota and graduated from the University of Minnesota in 1997 with a degree in International Relations.

His mother was born in the former Soviet Union. Debbins first visited Russia in 1994 when he was 19, lived in Russia for three years in the late 1990s and married a Russian woman.

Prosecutors say Debbins was first approached by Russian agents in 1996.  He allegedly told them he was a “son of Russia,” and said America needed to be “cut down to size.”

According to the indictment, Debbins even signed a statement saying he wanted to “serve Russia.”  His handlers gave him a code name, ‘Ikar Lesnikov,’ and flattered him with a Russian military uniform.

Debbins was so amenable, the indictment says, that at one point the Russians wondered if he was “actually a spy for a U.S. intelligence agency."

The FBI says Debbins provided Russian intelligence officers with the names of U.S. service members as potential recruitment targets and reveal sensitive information about the chemical and Special Forces units Debbins served under.

“The facts alleged in this case are a shocking betrayal by a former Army officer of his fellow soldiers and his country,” said Alan E. Kohler, FBI Assistant Director of Counterintelligence.

According to the indictment, in 2010 Debbins was prepared to deliver a U.S. military field manual on a thumb drive.  But he never delivered the manual because he said U.S. Homeland Security might catch him.

It is unclear from the indictment how the U.S. learned this information, or whether Debbins delivered any classified or secret documents to the Russians.  His last reported contact with Russian agents was in 2011.

Prosecutors say Debbins never reported his contacts with Russian intelligence, despite repeated opportunities and warnings that he could be a target for recruitment.

Debbins is charged with conspiracy to gather or deliver defense information to aid a foreign government.

By 2010, Debbins allegedly told the Russians he wanted to make money and needed access to the Russian market.  But his Russian handlers wanted him to get a position inside the U.S. government.

According to Debbins’ Linked-In page he has spent the last decade working as a consultant, instructor, and lecturer on all things Russian.

Most recently he has fashioned himself as an expert in cyber security.

In lectures he has explored Russian expansionistic psychology, and has said, “Russia sees itself as a Messianic nation.”

During one of his early visits to Russia, Debbins married a Russian woman he met in Chelyabinsk, a city with a Russian air force base.  His father-in-law was an officer in the Russian military.

After his honorable discharge from the U.S. Army, Debbins lived in Minnesota from 2005 to 2010.  He worked for a Ukranian steel manufacturer and a transportation company, the charges said.

During a podcast interview three years ago, Debbins said he was initially interested in Russia because of his heritage.

“My mother was Russian, and during World War II, they were slave laborers in a camp in Germany,” Debbins told the host.

“So, when I was growing up as a kid, I got fed lots of stories that made me very interested in this topic,” said Debbins.