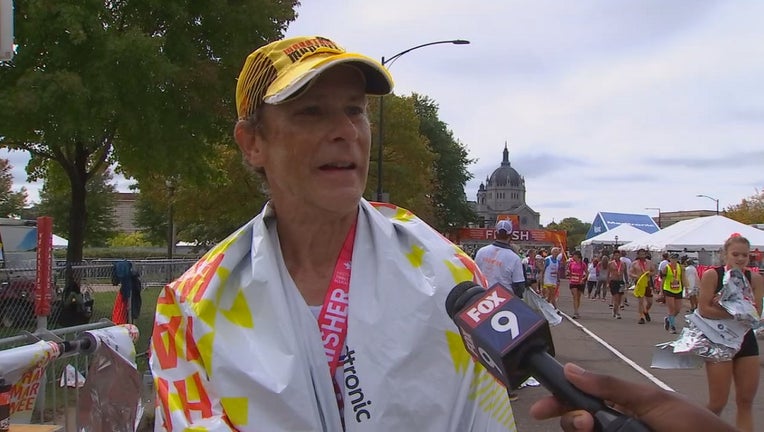 ST. PAUL, Minn. (FOX 9) - The Twin Cities Marathon was back on this weekend, with some COVID-19 protocols in place. Runners took off from outside of U.S. Bank Stadium on Sunday morning, on a 26.2-mile journey to the State Capitol in St. Paul.

"I started running and when COVID happened I just kept going," marathon finisher Carrie Erickson said. "I was like well, if I can run one mile then I can run two… if I can run two miles, I can run five, and well maybe I’ll run 26."

Among the runners on Sunday was Tom Perri who says he was competing in his 571st marathon and his 26th Twin Cities Marathon, all while he battles stage 4 prostate cancer.

This year, because of the pandemic, the number of runners at the event was limited to half of a normal year.

"It was a little nice at the start because it wasn’t as crowded," runner Tom Perri told FOX 9. "The biggest notice was the line for the Porta-Johns wasn’t as bad as it usually is."

Among the thousands of runners toeing the line, there were just as many different motivations. St. Paul Mayor Melvin Carter dedicated the race, his first-ever marathon, to Benny Williams, his former chief of security who died in 2019.

"I just keep coming out and running each race I can," Perri explained. He got his start with marathon running in 1993; and now 28 years, 50 states, and 571 marathons later, he’s still going, in his 26th time at the Twin Cities Marathon.

"It’s an extreme stress reliever, and it keeps me mentally fit and physically fit," Perri said. "So that I can go through these treatments that I go through when I went through 38 radiations in eight months on a drug treatment."

Perri is also racing against time, after a stage four prostate cancer diagnosis on July 30, 2019. He’s continued to run while going to appointment after appointment in a fight to push the disease into remission.

"I was so happy to be here, I never know when my last race is going to be with my situation," Perri finished. "Anytime I can run and finish a race, it’s tremendous."