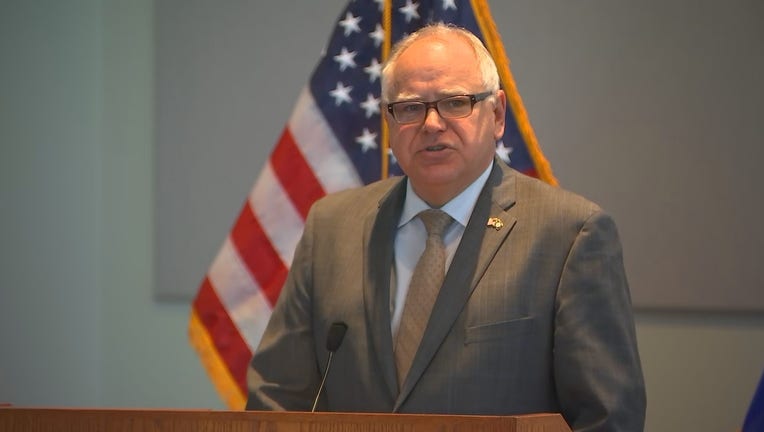 Gov. Tim Walz talks about the 2020-21 budget forecast that projects a $1.3 billion surplus.

ST. PAUL, Minn. (FOX 9) - Minnesota budget officials expect a $1.3 billion surplus over the next two years, setting up a battle in 2020 over what to do with the extra money – even though the eye-popping number comes with a catch.

Minnesota Management and Budget’s forecast reflects better-than-expected revenue for the state and a small decrease in estimated spending. The surplus allows the state to top out its rainy day fund at $2.4 billion, the highest it can reach under current state law.

Minnesota has $1.3 billion surplus. So why isn’t everyone happy?

Minnesota budget officials expect a $1.3 billion surplus over the next two years, setting up a battle in 2020 over what to do with the extra money – even though the eye-popping number comes with a catch.

The forecast is only a best guess, and it comes with major caveats. Rising labor and material costs will eat up most of the projected surplus. Second, there are risks in the global economy, including a slowing market for Minnesota’s exports because of tariffs backed by President Donald Trump.

It’s up to lawmakers to decide how to spend any extra cash, and in Minnesota’s divided state Legislature, no one agrees on much. Democrats favor spending on affordable housing and programs aimed at the state’s neediest residents, while cautioning that inflation would eat away at any extra money the state had.

“It doesn’t mean it is all rosy,” said House Majority Leader Ryan Winkler, DFL-Golden Valley. “We are only balanced if you assume we slowly going to let the air out of the tires of services that Minnesotans count on.”

One of the tax cut ideas advocated by House Republican Leader Kurt Daudt drew a strong rebuke from Walz.

Daudt said lawmakers should repeal the state’s 1.8 percent tax on medical providers. The state Legislature and Walz just restored the tax this year after a major political battle over whether it should be allowed to expire.

“Yeah, that’s not happening. Really?” Walz said when asked about Daudt’s suggestion to repeal it. “Do not talk about the provider tax this year.”

Daudt said he wouldn’t back down.

“I don’t believe him. I think he’s a better guy than that,” said Daudt, R-Crown. “I think he listens to Minnesotans and he knows this is the No. 1 issue they care about. And if we’ve got some extra money, we should help them with that issue.”

One of 2020’s key questions will be the amount of money that Minnesota will borrow for upgrades to roads, bridges and state-owned buildings.

Democrats who control the House are considering a $3.5 billion bonding bill, but Daudt said his caucus will not support anything more than $2 billion.

Any bonding bill requires a 60 percent supermajority to pass, so minority votes are required in both the House and Senate.

Walz and Senate Republicans did not name a specific dollar figure they’d like to see.

Walz said lawmakers should consider using $29 million to pay back the federal government for payment errors so two Native American tribes don’t have to. The issue is the result of wrongful payments from the state Department of Human Services. The two tribes, Leech Lake and White Earth, say they used the funds to administer medical treatments and can’t afford to pay for the state’s mistake.

Republicans said they would consider bailing out DHS only if lawmakers and Walz agree to major structural changes at the agency, which has been hit by a tidal wave of mismanagement.

“Without doing anything different, I don’t know why I would want to give one penny more to the department,” Gazelka said.