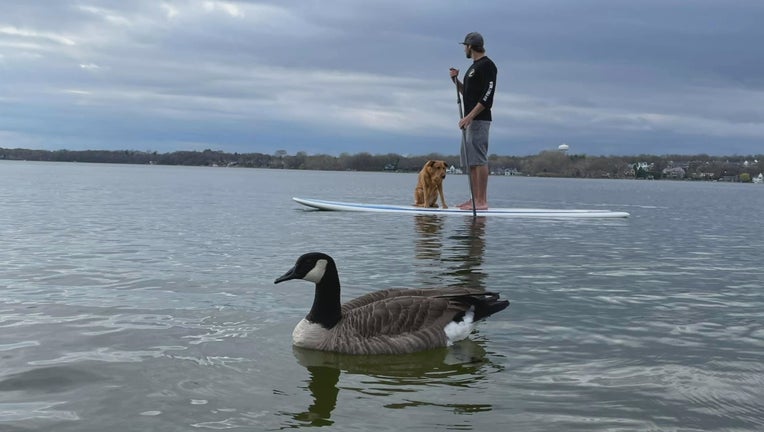 Peeps the goose swims in a lake alongside members of the Hendrickson family.

PRIOR LAKE, Minn. (FOX 9) - A family from Prior Lake is in a bit of a battle with wildlife officials over a goose who has become a close companion over the last year.

A year ago, the Peeps the goose wandered into the Hendrickson family’s yard, then only a gosling. The family decided to raise the goose, figuring he’d be good for their son during the pandemic. The family has 47 acres with a pond in Prior Lake, so there’s plenty of space for the goose to roam.

Minnesota family trying to get back pet goose from wildlife authorities

A Prior Lake family with a pet goose is doing all they can to get their goose back from authorities.

When both birds began following them on the four-wheeler around the property, like they were their flock, the Hendricksons started taking them down to Prior Lake to follow their jet ski. Through it all, they’ve become social media darlings.

"So it just seemed natural to bring him to a lake," said Jolene Hendrickson. "We did what any pet owner would do, right? If you have a dog that loves to go play in the water and stuff, you bring him to a dog park with a pond, so we brought our goose to the lake. Yeah and we were amazed, he loved it."

Monday night, Peeps went missing. He was nowhere to found on their property and never returned. Wednesday, they learned he was taken to a wildlife rescue facility after trying to climb into a stranger’s truck in Savage.

"We found out and we’re like thank God, you say your prayers he’s alive and we thought they’re just going to bring him back and then they said no, we’re not bringing him back," said Ronnie Hendrickson.

The U.S. Fish and Wildlife is trying to figure out what to do with Peeps, telling the Hendricksons they can’t keep Canada geese in captivity. Peeps and Puddles usually spend the night indoors for safety.

The family admits they made a mistake, but hope their beloved bird can come home.

"At this point, we can’t go back and undo what was done, and if they’re living their best, fullest goose life out here, what more could we do?" said Jolene Hendrickson. "I don’t think anyone could take them and give them the kind of life we’ve given them so far."

The family hopes they can figure out an agreement with the wildlife officials.

"At least they’ve been very, very nice," said Ronnie Hendrickson. "They could have been mean from the start, but it’s like we just need a little mercy here and figure this out."