Family and friends gathered on Saturday, like they do every fall and spring, to clean up a portion of Highway 81 in Dayton that is now dedicated to Christian Schmidt, who died in a 2019 crash nearby.

DAYTON, Minn. (FOX 9) - A Minnesota family is giving back to the community in honor of their late son who died in a 2019 crash on Highway 610.

Laughter spread out up and down the road during a highway cleanup on Saturday in Dayton, but the reason for the large turnout was more somber.

"Cristian brought a lot of happiness and ridiculousness to our world, and we think about him every day," Cristian’s mother Sara Schmidt told FOX 9.

On a late January night in 2019, Sara said goodnight to her 19-year-old son, but at the time she didn’t know it was the last conversation she’d ever have with him.

"He said, ‘I love you mom, God bless you too.’ Those were my last words with my son," Sara remembers. "I gave him a hug and the next thing I knew I was being awoken around four in the morning by a police officer."

Law enforcement says Cristian was driving at a high speed rate when his car collided with a concrete pillar on the Hemlock Lane Bridge. It exploded on impact, leaving a hole in the lives of his family and friends. 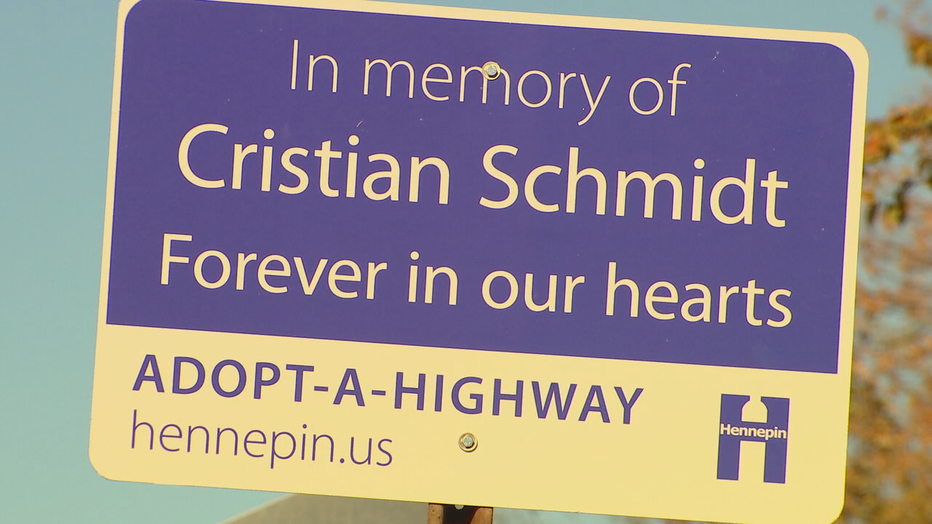 They gathered on Saturday - like they do every fall and spring - to clean up a portion of Highway 81 in Dayton that is now dedicated to the Champlin Park High School graduate.

"When they’re here I just feel close to Cristian, so that’s really important to me," Sara said before the event. "And we get to do this in service to our community."

In the years since his death, Cristian’s parents, Sara and John, have also demanded safety improvements on the road where their son lost his life.

"I am in full belief that because there were no guard rails, that [is why] my son passed," John said. "So it was important to have it fixed."

For seven months now, there has been a gaping hole in the Schmidt family.

After review, MnDOT installed a guard rail at a cost of about $18,000. It may prevent more tragedy, but it doesn’t bring Cristian back.

Cristian would’ve turned 22 years old this year. That fact is hard for his parents to process because they have no idea who their son would’ve become in the time since his passing.

"That’s one thing that’s really tough is we don’t know," Sara said. "We don’t know who our son would be right now."

They also wonder why he was out behind the wheel on that night in the first place.

"That’s one of the biggest things I think about every day is why, why he left, why, what made him get out and drive," John finished.