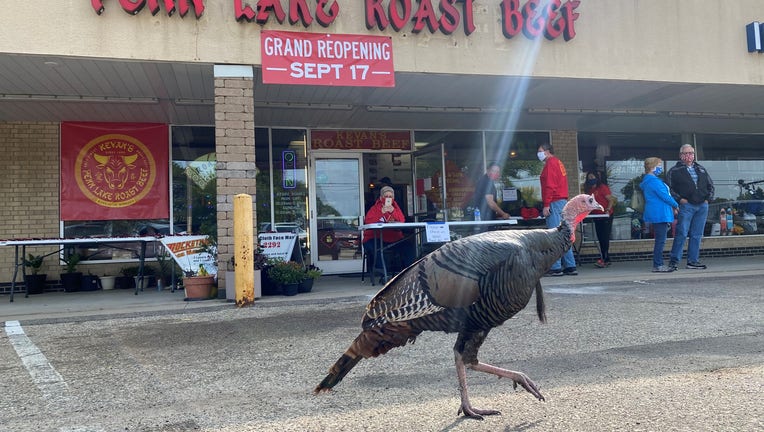 Penny the Turkey was shot this week after the DNR said he was becoming more aggressive. (Supplied)

BLOOMINGTON, Minn. (FOX 9) - Some Bloomington residents are upset after the Minnesota Department of Natural Resources shot and killed a popular turkey.

The bird had become a mascot to some businesses in the area and employees are sorry to see it go. Over the summer, Penny the turkey became a regular at the dry cleaners where Nancy Webb has worked for 16 years. She's absolutely heartbroken the feathered friend she saw almost every day won't be walking through the front door anymore.

Some Bloomington residents are upset after the Minnesota Department of Natural Resources shot and killed a popular turkey.

"Super sad," said Webb. "Just kind of sick to my stomach that they would do that."

Since March, the wild turkey, which neighbors named after the intersection where he hung out, has been a fixture at the businesses near 90th and Penn -- becoming a local celebrity in the process.

But the DNR says the bird had become acclimated to people feeding it at the nearby Burger King. After a growing number of complaints about Penny chasing motorcycles, blocking traffic and becoming increasingly aggressive, a conservation officer shot and killed the turkey at a nearby football field Wednesday afternoon.

"This is unfortunate," said Joe Albert with the DNR. "This isn't the outcome anyone wants or wanted."

The DNR says wild turkeys were wiped out due to unregulated hunting and loss of habitat in the state from 1880s to the early 70s when they were re-introduced to southern Minnesota. Since then, their population has grown to more than 70,000 and they've become increasingly common in urban areas -- where they sometimes come into conflict with their human neighbors.

"We urge people not to feed wild turkeys," said Albert. "We urge them not to become comfortable around people."

The DNR says relocating Penny wasn't an option because he could no longer fend for himself in the wild.

Even though he was donated to a family in need, Webb says losing him a week before Thanksgiving has left her with one less thing to be thankful for this year. "The one thing that brought us a little joy during COVID-19, now they took away."