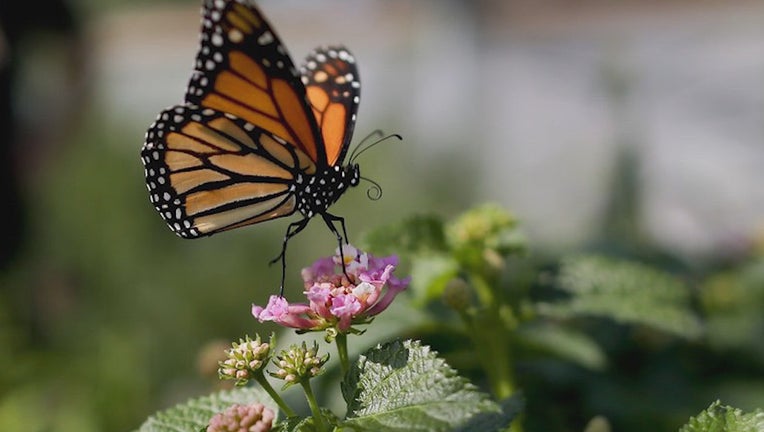 A monarch butterfly lands on a plant. (FOX 9)

EDINA, Minn. (FOX 9) - The monarch is the official state butterfly and in just a few weeks, millions of them will arrive here in Minnesota after migrating from Mexico.

The monarch population has plunged over the last several decades. An Edina, Minnesota couple has made it their mission to save them.

Minnesota couple on mission to save monarch butterflies

An Edina, Minnesota couple has made it their mission to save the dwindling monarch butterfly population.

Ward Johnson has loved the beauty and majesty of monarch butterflies since he was a child growing up on the prairie in western Minnesota.

"There's not much not to love about the monarchs," said Johnson.

However, he is worried his favorite species won't survive much longer without a little help.

Johnson says the number of monarchs that migrate from Canada to Mexico dropped more than 90 percent from 1992 to 2014 because the plant they depend on for their food and habitat, milkweed, is disappearing due to land development and pesticides.

Johnson's parents, Irvin and Gladys, spent their winter vacations driving their camper down to Florida or Texas planting milkweed seeds in parks and on the side of the road along the way.

"Monarch butterflies lay their eggs on milkweed plants," said Johnson. "The caterpillars come out live their whole lives on a milkweed plant. They eat milkweed leaves every minute of the day."

Seven years ago, Johnson and his wife started the Save Our Monarchs Foundation to help bring the butterfly's population back by restoring their habitat - one milkweed plant at a time.

So far, more than 17,000 schools around the country have signed up to receive pollinator pouches with milkweed and wildflower seeds inside to start their own butterfly gardens.

"We want to get those in the hands of the kids, so they can influence their parents, influence the people around them and make an impact in their community," said Johnson.

Johnson says their nonprofit has sent out more than 100 million milkweed seeds across North America. He hopes their mission continues to grow until monarch butterflies rule the insect world once more.

"There’s no end point," he said. "It's not like we made it. That is never going to happen. There is a possibility the population of the monarchs will be zero if we don't take care of them."

People can get free milkweed seeds by sending a self-addressed stamped envelope to the following address:

A $5 donation is encouraged, but not required.