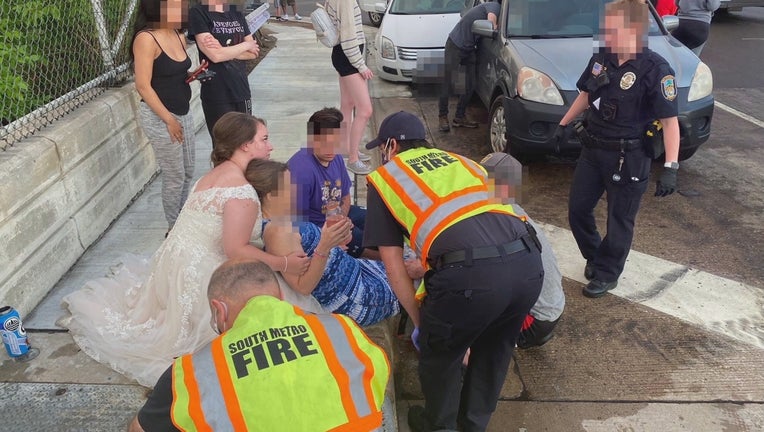 Bride Rachel Taylor was among those who jumped into action to help a person injured in a car crash on June 21, 2020. (Calvin Taylor)

SOUTH ST. PAUL, Minn. (FOX 9) - On her wedding day, a Minnesota bride – willing to get her dress dirty – jumped out of her car to help the victim of a crash. She says she couldn’t have done it without the help of other good Samaritans who were willing to lend a hand too.

The photo posted on Facebook stopped people in their tracks: A bride – in her wedding dress – kneeling with other good Samaritans to help the victim of a car crash in South St. Paul, Minnesota.

Bride among those who helped crash victim

A Minnesota bride was among those who helped a crash victim.

“Definitely a lot of double taking and thinking, ‘Well I haven’t seen that one before,’” said Tim Congdon, a South Metro firefighter.

The newlyweds, Rachel and Calvin Taylor, were on their way home from their wedding on June 21. They pulled off of I-494 onto 5th Avenue and when they saw what was happening, they say they knew they had to stop and help out.

According to officials, what started as a fender-bender quickly became a four-vehicle crash with one woman pinned in between two vehicles.

“In this case, the victim had a wound that was pretty bad and the bystanders had helped to control the bleeding on that quite a bit, which was very helpful,” said South Metro Fire Department Captain Brad Quiggle.

Rachel says she was among a group helping out. One person had applied a tourniquet to help stop the bleeding. Another held the victim’s hand, while Rachel sat behind her, and used her experience from nursing school to try and keep her calm.

“I think there was a good mix of people there that were able to provide all of the things that she needed in a holistic way, not just a ‘She needs her leg tied to stop her bleeding situation,’ said Rachel.

First responders say the victim’s injuries were serious and the bleeding could have been worse were it not for those who jumped in to help.

“Gosh, we need more selfless people like that around this time, don’t we?” said Quiggle.

They also say seeing a bride in a wedding dress willing to help was a welcome first.

“I’m always kind of the mindset that if I did come across an accident, I was going to get out and help and this just happened to be the day that it happened,” said Rachel. “I didn’t save her myself. It was definitely a team effort.”

Rachel says she is not a licensed nurse yet, but she is studying for the exam and hopes to get her license soon.