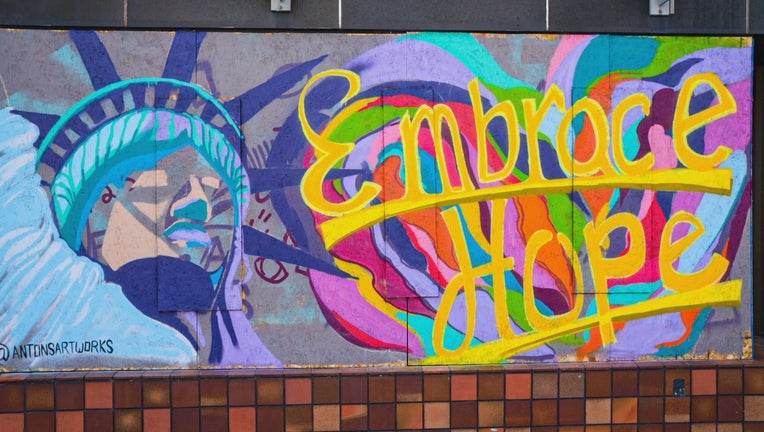 This is just one of the pieces that have popped up in the aftermath of Floyd's death.

MINNEAPOLIS (FOX 9) - Minneapolis artists are finding ways to bring positivity and hope to a city grieving after the death of George Floyd.

New art is recognizing Floyd’s life and the impact of the events that have followed his death is being found around the city.

Minneapolis artists use murals to cope with loss after unrest

Minneapolis has been in the spotlight for the unrest caused by the unrest after the death of George Floyd.

Antoine Jenkins and Josh Brown experienced one of those events. They were on the I-35W bridge when a semi drove through a crowd of protesters. Even though no one was hurt, they are turning that chaotic experience into a work of art.

"A semi truck driving into a bunch of people seated on the ground going 60 miles an hour and nobody getting hurt is a miracle and we decided we needed to get it out," Brown explained. "And we feel like George saved us that day."

Their mural at Spyhouse Coffee is one of the dozens that have popped up in Uptown since many businesses boarded up their doors and windows after they were broken out or looted during several nights of unrest last week.

Some of the paintings have been organized by the Uptown Association, which puts on the Uptown Art Fair every summer, while others have been more spontaneous from artists who saw all the plywood boards as empty canvases.

"We just want to bring some positivity to the area to the community and this is such a positive way to do that," said Natasha Greiling with the Uptown Association. "It's a natural fit for us."

In fact, driving down Hennepin Avenue is like taking a trip through an art gallery with murals ranging from portraits of George Floyd, to homages to Black Lives Matter, to pleas for Minneapolis to do the right thing.

The general manager at Amazing Thailand says she and her restaurant's owners scared off looters who had broken through the front door She said the new images are helping her put the painful memories aside.

"That was a nightmare and terrifying night that is still haunting me, but every time I come back here to Amazing Thailand and see this amazing art, it's healing me," said Korawan Muangmode.

After what's happened, Jenkins and Brown hope the rest of the world doesn't paint Minneapolis with broad brush strokes. But they hope their creative expression captures a moment in time that none of us will soon forget.

"This is history in the making and this is where people who are going to come to Minneapolis and want to see it are going, so let's do it," said Brown.