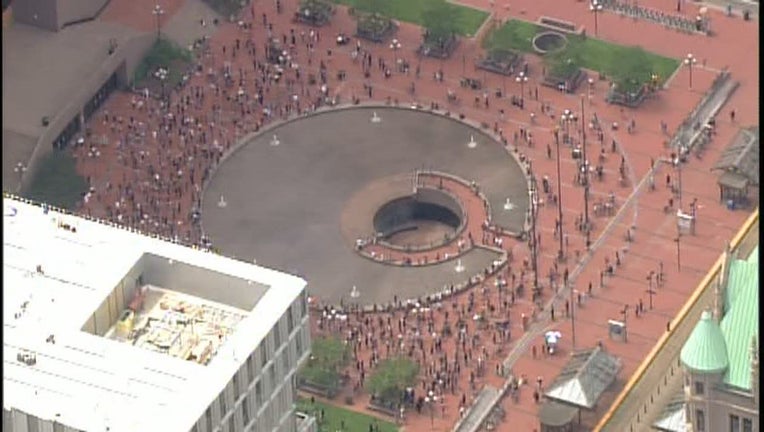 MINNEAPOLIS (FOX 9) - Rallies held in Minneapolis were among a dozen events planned in cities across the United States on Saturday as part of a day of action that follows unrest caused by the death of George Floyd.

Hundreds of people gathered near the Hennepin County Government Center Saturday afternoon as part of the NAARPR's "Day of Action to Stop Police Crimes." For the day, advocates urged members of the community to take a stand not only against the death of George Floyd but the use of force and curfews put in place during the nights of unrest that followed Floyd's death.

Protesters once again descended on Minneapolis as activists seek to bring significant change to policing in the city after George Floyd's death.

In Minneapolis, protesters rallied at the Hennepin County Government Center before moving onto the streets and marching towards the Minneapolis Police 1st Precinct, standing in front of a makeshift wall set up to protect the building.

Along with calling for justice for George Floyd, the group pushed for Hennepin County Attorney Mike Freeman to be recalled. Freeman was the prosecutor who had handled the investigation into Floyd's death until the state put Attorney General Keith Ellison in charge. Criticis felt Freeman waited to long to bring charges against Chauvin and three other officers who were on scene for Floyd's arrest.

All four officers were arrested after Ellison took over the case.

Saturday, protesters also echoed calls from a rally on Friday, held outside the Minneapolis police union's offices on University Avenue, which called for the union president to resign as well.

Another rally as part of the day of action was held Saturday morning. A third is underway outside U.S. Bank Stadium, with plans to march through downtown.