DULUTH, Minn. (FOX 9) - A man rescued a 6-year-old boy who was by himself in the middle of a river, and the entire heartbreaking ordeal was caught on his GoPro video.

On July 5, David Jones was fishing out on the St. Louis River in Duluth, fighting a sturgeon, when he saw a little boy stranded in the middle of the channel. The 6-year-old old, who was wearing a life jacket, was panicking and terrified.

"It was the sound of a child that was screaming who was in complete panic, complete fear, and just something that was almost indescribable or something that you would honestly hear from a horror movie," Jones said.

As a former police officer, Jones said his law enforcement training kicked in, and he intervened, potentially saving the child's life.

"Are you gonna be able to make it into shore? Do you need some help?" Jones asks the little boy in the video.

Drawing on his background in patient care as a behavioral health technician, he kept the boy calm and helped him grab onto the kayak, and then they made their way to shore.

"You're strong, right? OK. All right. So I just need to be strong for a few more seconds," he told the boy. 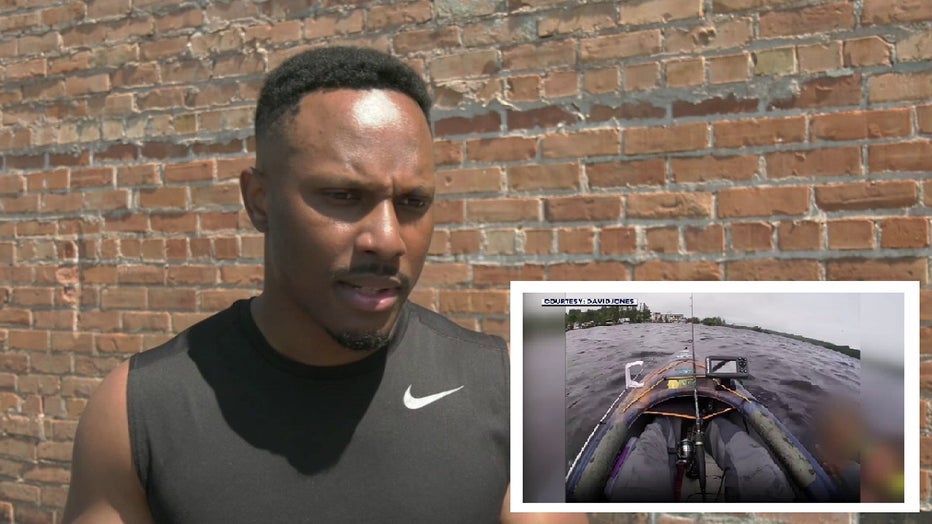 David Jones was fishing out on the St. Louis River in Duluth, fighting a sturgeon, when he saw a little boy stranded in the middle of the channel. (KQDS-TV/David Jones)

After they got to the shore, Jones asked a stranger at a nearby home to get the boy a towel, as they called 911 and waited for paramedics to arrive.

People online have hailed Jones a hero, but he said he did what anyone would have done.

"You got a kid that's bobbing up and down in the middle of the water on the St. Louis river. It's 57 degrees outside, so I'm not sure what the water temperatures were," he told FOX 21 in Duluth.

Before he started fishing, Jones had seen the little boy swimming next to his dad's sailboat.

Duluth police said they interviewed the boy's parent, who told officers he lost hold of a rope attached to the boat and the wind and the currents prevented him from swimming to shore.

Jones said his main concern was for the child's health because he was shivering and had started turning blue. He posted the video on social media in hopes of bringing attention to water safety.

Last year, a father drowned in the same river while attempting to save his daughter and another child.

He said despite the conditions out on the water, the little boy held on and never gave up.

"I still hope and pray that the kid is OK every single day, and I hope that he can recover from this incident and be fine and also hope that he never is put in this position again by another adult," Jones said.

Duluth police confirmed to FOX 9 that no one involved in the situation would face charges.