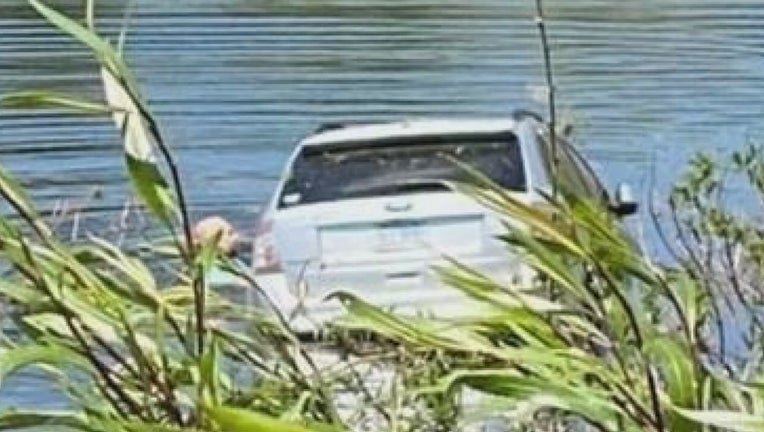 A bystander jumped into a pond to help rescue a driver who went off the road in Eagan, Minnesota. (City of Eagan)

EAGAN, Minn. (FOX 9) - A good Samaritan on his lunch break dove into a retention pond to help rescue a driver whose car went off the road in Eagan, Minnesota.

"I was kind of in shock. I didn’t really think about it, just acted," Bill Henk said.

Man saves driver who crashed into pond in Eagan, Minnesota

A man helped save a driver who had crashed into a pond in Eagan, Minnesota.

On Monday afternoon, Henk had stopped by the Lunds and Byerlys in Eagan when he noticed something odd. As he was leaving the parking lot, he saw a car was stopped in the intersection. All of a sudden, the vehicle accelerated, jumped the curb and started heading down a steep embankment, towards a retention pond.

"[He] got a little airborne and just straight down the embankment," Henk said.

Henk parked his car, called 911 and ran down the embankment. He says he jumped into the water and started swimming out to the car.

"It was just kind of autopilot. I wasn’t even thinking about it," Henk said.

Henk said he saw a man sitting in the driver’s seat and could tell the man was likely suffering a medical emergency.

"I just started pounding on the window I could see his head bobbing up and down, so I knew something was wrong, something medical condition," Henk said.

He said he couldn’t break any of the windows or get the door open but started pulling on the vehicle as it was bobbing in the water, slowly starting to sink.

"I was hanging on to his handle and I was kind of swimming the car back to shore," Henk said.

Once Eagan police and emergency responders arrived, they started bringing the car toward shore, eventually breaking a back window to get the man out as the car started to fill with water.

"The water was up to his chin by the time we were pulling him out," Eagan Police Officer Luke Nelson said.

"There’s a lot of accidents that don’t end like this, so it’s nice to have a win, and someone is going to be going back home to their family at the end of the day too," Eagan Police Officer Sean Farnham said.

Henk said he’s glad he was there to help when he was and that the man wasn’t hurt.

"If I was in the reverse position I would hope they would help out as well, so I’m glad they’re okay," Henk said.