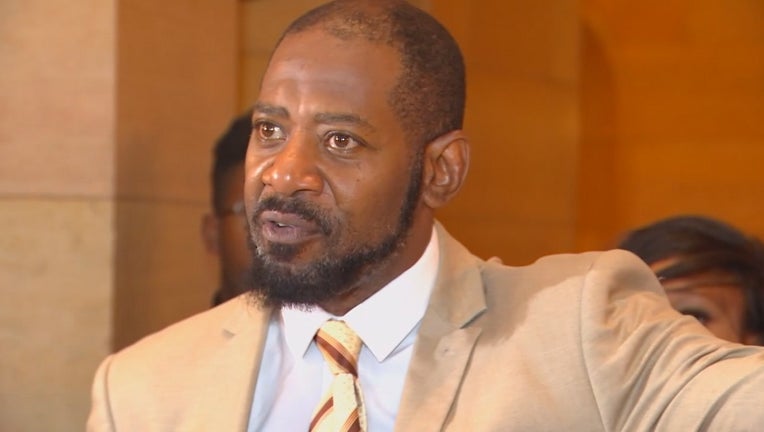 Rep. John Thompson is now facing calls for his resignation after past allegations of domestic violence were uncovered by FOX 9. (FOX 9)

ST. PAUL, Minn. (FOX 9) - As Minnesota lawmakers from both sides of the aisle call for his resignation, the attorney for Representative John Thompson released a statement on his behalf casting doubt on a series of police reports uncovered by FOX 9 detailing multiple past allegations of domestic violence against the Minnesota House member.

In the statement released on Sunday, Thompson's attorney Jordan Kushner said the lawmaker "challenges the authenticity of the police reports that have been circulated to the press" – despite the fact that Thompson was convicted in one of the cases.

As Minnesota lawmakers from both sides of the aisle call for his resignation, the attorney for Representative John Thompson released a statement on his behalf casting doubt on a series of police reports uncovered by FOX 9 detailing multiple past allegations of domestic violence against the Minnesota House member.

The statement came one day after Minnesota House DFL leaders, Governor Walz, and the Minnesota DFL Party chairman all called for Thompson to step down after FOX 9 uncovered the past allegations.

In his statement, Kushner further claims law enforcement groups provided the police reports to media members. However, FOX 9 found the reports while making efforts to verify Thompson's residency status -- which came into question this month after Thompson was pulled over in St. Paul.

Kushner goes on to argue that Thompson has been a target of law enforcement leaders ever since last August when the then-candidate for the Minnesota House of Representatives made heated remarks at a protest outside the home of former Minneapolis Police Federation President Bob Kroll. Thompson later apologized for his "inflammatory rhetoric" while DFL leaders distanced themselves from the tirade.

What sparked the investigation

The recent trouble began after Thompson accused a St. Paul police sergeant of racial profiling for pulling him over on July 4. Police told FOX 9 that officers stopped Thompson for driving a vehicle missing a front license plate. During the stop, Thompson handed police a Wisconsin driver's license.

It was later learned that Thompson's driving privileges in Minnesota had been suspended for unpaid child support and he had renewed the Wisconsin driver's license in November 2020 with a Wisconsin address -- the same month he was elected to the Minnesota legislature. That sparked questions over Thompson's residency and eligibility to hold office in his district in St. Paul.

As FOX 9 looked into Thompson's residency, we uncovered four past incidents where Thompson had been accused of domestic violence between 2003 and 2010, including crimes that had allegedly occurred in front of children.

After FOX 9's report, GOP lawmakers also called for Thompson to step down from office with Minnesota House Minority Leader Kurt Daudt threatening that Republicans were prepared to file ethics complaints against Thompson if he didn't leave office.

While Thompson has not directly addressed the controversy, his wife did post a message on Facebook on Saturday dismissing the allegations and saying Thompson had no plans to resign.

"I am in fierce protect my king/protect my pack mode, please understand that 'respectfully' we are not resigning."

In his statement, Kushner did not address Thompson's future career plans.

Republicans say they are anticipating that Representative Thompson will not step down and they are now working on their next steps.

Sources tell FOX 9 state GOP lawmakers met Sunday night to figure out what issues to present to the Ethics Committee.

Monday, Republicans are also planning to meet with the Ethics Committee to sort out the allegations.

"Mr. Thompson challenges the authenticity of the police reports that have been circulated to the press.  Mr. Thompson and his wife - the only person whom Mr. Thompson would have been with at the times of the incidents - categorically deny that any of the inflammatory allegations (including but not limited to choking anyone or exposing himself) ever occurred. Mr. Thompson's wife further does not recall and does not believe she ever made such allegations. They have been together as a couple for more than twenty years, have worked through issues earlier in their relationship, and have a solid marriage.  It is my understanding that the purported police reports were provided to reporters by persons associated with law enforcement groups. These are likely the same groups that have been constantly and vigorously waging a smear campaign against Mr. Thompson since his speech in Hugo, MN in August 2020 (11 months ago).  If these police reports existed in their current form, it is unfathomable that the many people digging into Mr. Thompson's past would not have found those police reports before the November election much less during the ensuing months. The police reports are a product of the campaign to silence an American African man who speaks out against powerful and abusive interests, and not the product of any effort to uncover truth."