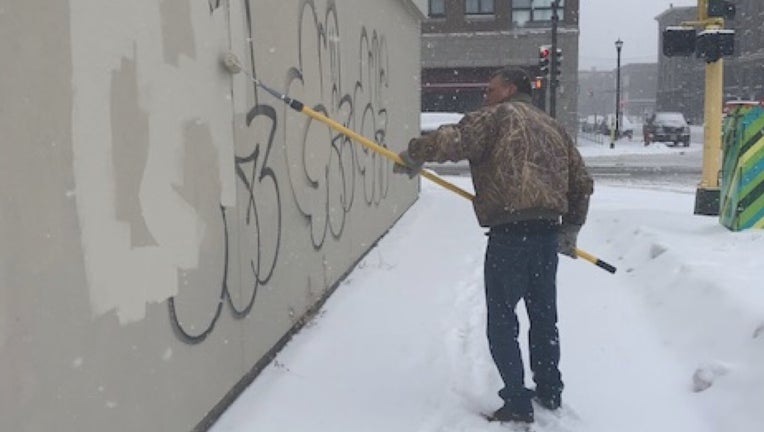 MINNEAPOLIS (FOX 9) - Several businesses in a Minneapolis neighborhood are voicing concerns over an increase in criminal activity there in recent months.

Several businesses in a Minneapolis neighborhood are voicing concerns over an increase in criminal activity there in recent months.

Greatapes has been at the corner of 15th and Nicollet for nearly 40 years, but the business has been vandalized by graffiti a dozen times since March and owner Max Woelm says the cost of repeatedly removing it is adding up.

"I'm numb to it now," he said. "When I drive down that two-block stretch, as soon as I see my building, is there going to be graffiti to take off, or am I going to have to have an easy day?"

From graffiti to broken windows to robberies and break-ins, several business owners in the Loring Park neighborhood say they've seen an increase in crime over the last few months. They say they are already struggling because of the pandemic and the unrest following the death of George Floyd - and this is one more issue they have to deal with as they try to stay afloat.

"Almost every business within two blocks of me has been a victim of crime in the last three months," added Nicollet Diner owner Sam Turner.

The owner of the Nicollet Diner says his business was robbed twice in one week by the same person. Sam Turner says one employee has already quit because of it and he worries about the safety of his other 50 workers.

"Almost still in a state of shock," said Turner. "I never imagined it would happen once let alone twice in such a short period of time."

A spokesperson for Minneapolis police says they have added extra patrols and other resources to the neighborhood which has led to several arrests for felony-level crimes. But Woelm says if the situation doesn't get better soon, he may have to move his business somewhere else.

"If coming down to Minneapolis and having an investment down here isn't safe, then there is no reason to be down here."