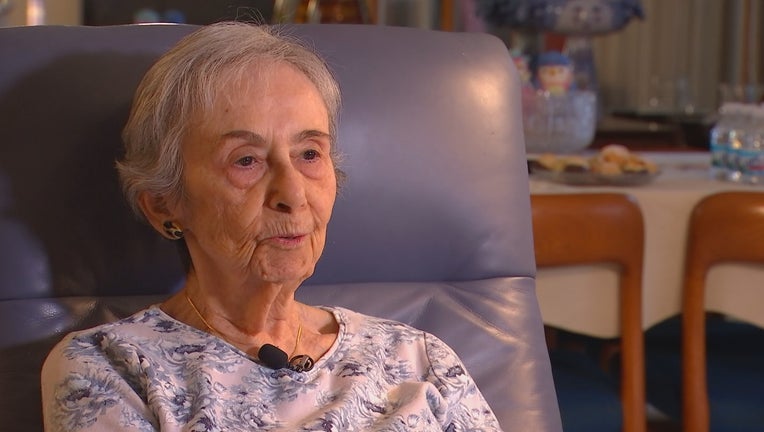 A Golden Valley woman shares her story of surviving the Holocaust.

(FOX 9) - January 27 is marked as International Holocaust Remembrance Day, and while it signifies the end to a dark time in history, it also includes stories of hope and incredible resilience.

A woman from Golden Valley, Minnesota, survived the Auschwitz concentration camp, and now, she is sharing her story.

‘I knew what was happening’: Minnesota woman shares story of surviving Holocaust

January 27 is marked as International Holocaust Remembrance Day, and while it signifies the end to a dark time in history, it also includes stories of hope and incredible resilience.

For 91-year-old Judy Baron, her mother's candles are among the few pieces from the past left from her life before the Holocaust.

"It is emotional. I have these emotions when I go to bed at night, and everything comes back,” Baron said. “I think of my parents and how they passed away, and that's very hard."

Baron was just 15 years old when the Nazis rounded up her family in Hungary and loaded them on cattle cars for the 3-day train ride to Auschwitz. There, Baron said the arrivals were separated by a man she believes was the infamous Nazi physician, Dr. Joseph Mengele.

Baron said she and her older sister were assigned to different barracks than her mother and younger sister - until they were sent to the gas chambers.

"We tried to look into Camp A and saw them every once in a while, but I didn't see them anymore. By then I knew what was happening."

By the time the Russian soldiers reached Auschwitz, Baron and her older sister ended up at the Bergen-Belson concentration camp in Germany, which was liberated by British soldiers in the spring of 1945. But Judy's sister, who had contracted typhus, died before she could taste freedom, leaving Baron the sole survivor of her immediate family.

"I was past the stage where I could even be happy because I was worried about my sister. We were so used to taking care of each other…it was good to know they were coming, and we were happy, but by then we knew we lost our mother and young sister…there comes a point where you no longer feel."

Seventy-five years later, the number the Nazis tattooed on Baron's arm has faded, but her memories of the concentration camps are crystal clear. And, after hearing news of children held in cages at the Mexican border and a recent rise antisemitism, she said she fears history could repeat itself.

"I am afraid for my children and my grandchildren and the people who come after us. I may not be here, but I don't want to leave a country for them like this."

On the 75th anniversary of the liberation of Auschwitz, Holocaust survivor Judy Baron gives the full account of her tale of survival.