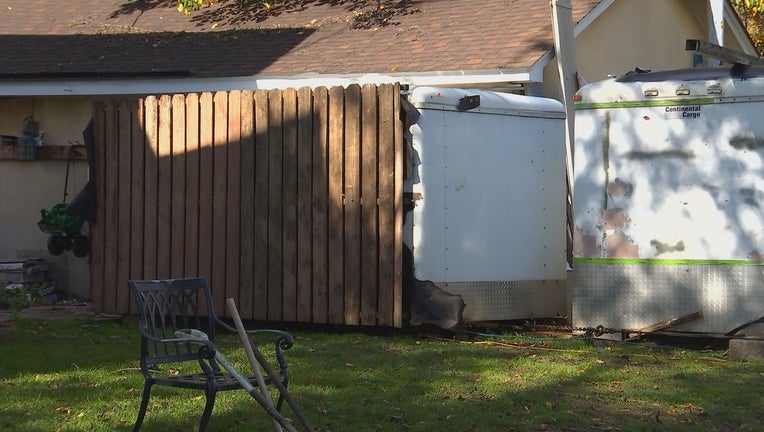 Trailers at the suspect property appeared to be intentionally hidden.

ST. PAUL, Minn. (FOX 9) - After stolen trailers and a batch of construction tools were found in St. Paul, some of the alleged victims are demanding to know what is going on while the man arrested in the case insists he is not a thief.

Police have returned some of the items to their owners, but so far there have been no criminal charges in the case.

Man arrested for stealing trailers in St. Paul insists he’s not a thief

After stolen trailers and a batch of construction tools were found in St. Paul, some of the alleged victims are demanding to know what is going on while the man arrested in the case insists he is not a thief.

St. Paul Police say they are trying to reconnect victims with their stolen gear, but they describe these kinds of cases as “complex.”

“It’s coming into winter now where we’ll be slower, so we can’t really afford to be starting over and buying all new stuff,” said Tim Martin and Kip Evangelist, of Well Hung Exteriors.

Martin and Evangelist have owned a small Twin Cities siding operation for 20 years. They are frustrated by the recent theft of their tool trailer and its contents. They estimate it put them out of $10,000.

“You go home at night to eat dinner and get ready for the next day and they’re out traveling around, finding trailers and stealing it. It’s not fair,” Martin said.

Last week, the duo received a call from St. Paul Police that their trailer was found. FOX 9 cameras were rolling as investigators descended on a home on the 800 block of Scheffer Street.

The trailer is no longer usable as the tongue hitch and tires were cut off. The trailer turned into an outdoor storage container with fencing around it that seemingly obscured it in the cluttered lot.

A Twin Cities contractor had tens of thousands of dollars in construction equipment and gear stolen in a trailer left at a Minneapolis job site. But thanks to GPS technology, he has his trailer back.

Unfortunately, Martin and Evangelist’s expensive gear was all gone by the time they claimed their property at the impound lot.

“I had no idea that was stolen,” said the man initially arrested for the theft last week, Jeffrey Groves. “Yes, I added the fencing so it would look nice and neat in the yard. I had no idea any of that stuff was stolen.”

Groves is scheduled to be sentenced on a separate charge of receiving stolen property next week. According to court documents in that case, he was caught by the State Patrol hauling a stolen trailer over the summer.

In a phone call with FOX 9, Groves argued that he is not a thief. He said he trusts the wrong people when either borrowing or buying goods on the street for his own handyman and construction work.

“People come to my jobs all the time with tools for sale,” he said. “I don’t know if the stuff is stolen or not. You guys are making it out like I’m stealing stuff from job sites. That’s not the truth at all.”