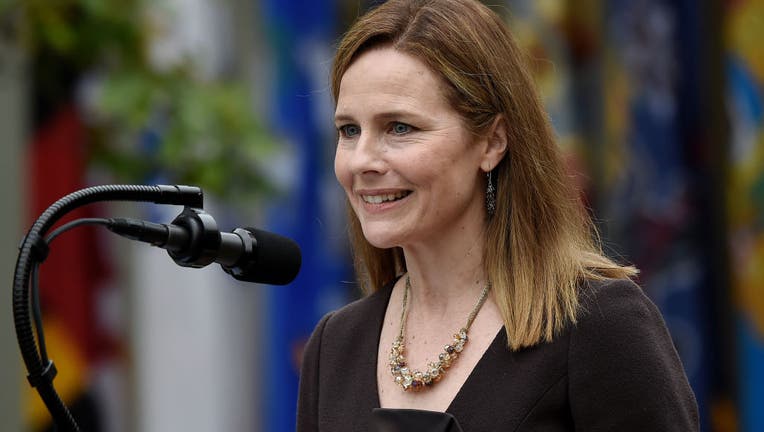 FILE - Judge Amy Coney Barrett speaks after being nominated to the US Supreme Court by President Donald Trump in the Rose Garden of the White House in Washington, DC on September 26, 2020. (OLIVIER DOULIERY/AFP via Getty Images)

(FOX 9) - An election year clash was set in motion on Sunday, as President Trump unveiled his nominee to fill the seat left vacant on the Supreme Court following the death of Ruth Bader Ginsburg.

How might Amy Coney Barrett rule if confirmed to the Supreme Court?

An election year clash was set in motion on Sunday, as President Trump unveiled his nominee to fill the seat left vacant on the Supreme Court following the death of Ruth Bader Ginsburg.

Senate Republicans have vowed to move forward with Barrett's confirmation as Democrats say the seat should be filled by whoever wins the 2020 election.

Along with serving as a judge, Barrett is a mother of seven, a wife, and a professor at Notre Dame Law School.

"The president has nominated me to serve on the Supreme Court and that institution belongs to all of us. If confirmed, I would not assume that role for my own circle or for my own sake. I would assume this role to serve you."

Former Minnesota U.S. Attorney and University of St. Thomas law professor Rachel Paulose says we saw hints of how she might rule from the bench.

"She spoke as someone who was committed, is committed to the idea that judges are not policymakers but they apply," Paulose explained. "Judges apply the law as written, regardless of whether or not they agree or disagree with that law."

While there seems to be agreement Barrett has enough experience for the job, there are concerns her conservative personal views may affect some historic decisions on healthcare and abortion.

If confirmed, the question will be how Barrett's personal views will shape her decisions on the bench.

With Republicans in control of the Senate, Democrats have few options to stop the confirmation. It's unlikely the process will be complete before the election. However, President Trump and the Senate could move forward with the confirmation before the end of the year, no matter who wins in November.