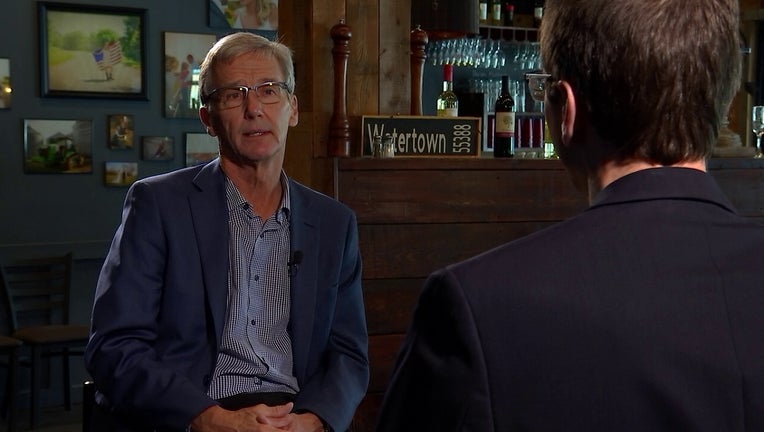 WATERTOWN, Minn. (FOX 9) - Dr. Scott Jensen, the Republican-endorsed candidate for Minnesota governor, spent part of Sunday afternoon on a lake in the southwest Metro, untangling lines for kids at a fishing opener.

It was a respite from a bruising, nine-round endorsement battle in Rochester the previous day. Yet an even tougher task lies ahead: unseating DFL Gov. Tim Walz and breaking Republicans' long losing streak in statewide elections, which dates to 2006.

After winning the Republican endorsement to be the governor candidate this fall, Dr. Scott Jensen sat down with FOX 9’s Theo Keith to speak about the issues that will be the focus of his platform.

Jensen, a family physician, gained a national following among conservatives with his skepticism of COVID-19 vaccines and opposition to mask mandates and forced business closures during the pandemic. But he acknowledges that he needs to broaden his appeal to win in November.

Jensen said he and running mate Matt Birk, a former NFL offensive lineman, would appeal to younger voters, suburban women, and minorities to expand the GOP's base this year.

"One of my challenges was I needed to demonstrate to the (GOP) delegates and to Minnesotans that I’m not just a one trick pony with one issue," Jensen said. "It’s going to be a challenge for me going forward. I would think Gov. Walz and his team and (DFL Chairman) Ken Martin and the Democratic machine would try to paint me into the corner as much as they can."

The current baby formula shortage and 40-year-high inflation will be potent issues, Jensen said. But he ticked off a handful of others that he expects to play well with millennials and Generation Z: corporate responsibility, conservation and the environment, and consumer protection.

Jensen did not shy from controversial positions during the GOP endorsement race. This month, he said DFL Secretary of State Steve Simon should "see how he looks in stripes" because of Simon's decision to join a consent decree that expanded absentee voting during the 2020 election.

At Saturday's convention, Jensen said he would be willing to shut down state government to force an election security bill through the Legislature. Specifically, that bill would need to have a voter ID requirement, Jensen said Tuesday.

From the convention stage, he said he would commute former Brooklyn Center police officer Kim Potter's sentence for killing Daunte Wright during a 2021 traffic stop.

In Minnesota, a governor acting alone cannot commute sentences. Unanimous support from the three-member Board of Pardons, which includes the governor, attorney general, and Minnesota Supreme Court chief justice, is required.

"I think I can be very persuasive," Jensen said. "I think having Kim Potter in jail does nothing to increase safety, nor does it represent justice. I think we can have Kim Potter working on behalf of minority groups, education groups, whatever. Having her in jail with what happened makes no sense to me at all."

Jensen said he would not have agreed to the trilateral budget deal announced Monday by Walz, Republican Senate Majority Leader Jeremy Miller and DFL House Speaker Melissa Hortman. The agreement splits the state budget surplus into thirds: $4 billion for new spending, including education and public safety; $4 billion for tax breaks, and $4.2 billion left on the bottom line in case the economy worsens.

"What we've done is we've taken $3-4 billion, and we've put it into the budget as a structural change that will now be there when we create the next budget," Jensen said. "We just keep spending. I think that money needs to be returned to the people who are paying taxes."

Jensen said he would have insisted on up to $10 billion for tax cuts, which he said could include a combination of direct rebate checks and income tax cuts. Republicans in charge of the Senate want income tax cuts, while Walz has proposed rebates of $500 per adult -- which his staff has dubbed "Walz checks."

"I would never call them 'Jensen checks,'" Jensen said. "If you want to go with a rebate of some sort based on who paid in, I can absolutely go with that."

Jensen's time at the Capitol

Jensen served a single term in the Minnesota Senate from 2017-2020 and decided not to run for re-election. He said he'd found the Senate a place with "so little appetite for intellectual curiosity" on some issues. For example, he once proposed a bill on ranked-choice voting and sought an informational hearing because "I was astounded at how little the Legislature understood about it," Jensen said.

Walz told reporters Tuesday DFL governor told reporters that he had a "cordial" relationship with Jensen during their shared time at the Capitol but that it would be very hard to govern "on division."

"The words you speak and the actions you take can’t be misaligned. I think that’s a really important piece of this. It’s really hard to govern if you burn the house down."

Jensen is Walz's presumptive opponent in November, though the matchup will not be set until the end of the candidate filing period this month.

Jensen said he reached out but hadn't heard from fellow Republican governor candidates Kendall Qualls and Rich Stanek since the convention. Qualls, who finished runner-up to Jensen for the GOP endorsement, has said he plans to transition back into "private life" but has not endorsed Jensen.

Stanek, the former Hennepin County sheriff who did not attend the convention, is "evaluating his options," a spokesman said when FOX 9 asked if Stanek planned to force a primary against Jensen.

Republicans will have a contested primary in one other statewide race, for attorney general. Doug Wardlow, who lost to DFL Attorney General Keith Ellison in 2018, said Tuesday he will run in a primary against GOP-endorsed candidate Jim Schultz after pledging not to.

"I think it's a mistake for the conservative movement and I would ask that Doug honor his word and not do that," Jensen said.

A third candidate, Dennis Smith, said he will not run in the GOP primary for attorney general after previously saying he planned to.