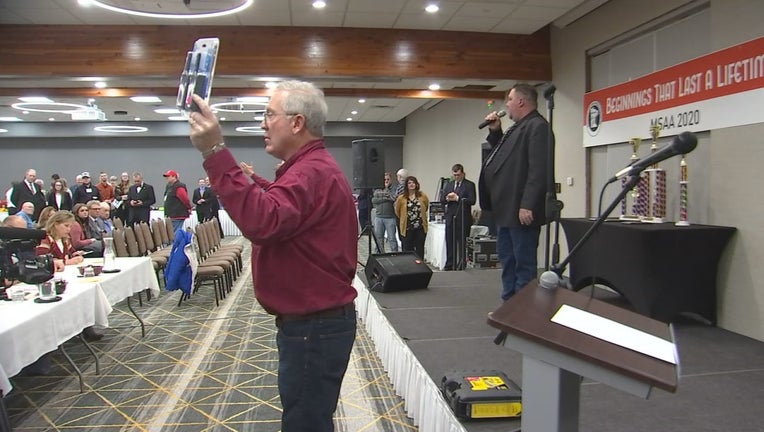 Minnesota auctioneers showed off their skills on Thursday to see who was the best of the best. (FOX 9)

ST. CLOUD, Minn.. (FOX 9) - The cream of the crop among auctioneers in Minnesota went bid-to-bid Thursday evening to see who would become the champion.

In Minnesota, there are a couple of thousand licensed auctioneers. Two dozen got together at the Holiday Inn in St. Cloud, Minnesota to see who is the best of the best.

The best of the best among auctioneers in Minnesota went bid-to-bid Thursday evening to see who would be crowned the best.

In a hotel meeting room, judges witnessed the art of buying and selling at the speed of sound. Cody Young has dreamed of being an auctioneer his entire life. Thursday, his bid-calling talents took center stage.

"I've enjoyed a trucking company for the last five years," Young said. "I would throw that out of the window to do this full-time."

Each one uses their own unique chant to sell three items while judges score them on categories like poise, command, and appearance.

"They are looking for when they are out there calling bids is how well you annunciate your words," said Scott Mihalic, the 2019 champion of the event. "There's a scoresheet in there for whether you said sold or not. That's worth five points out of 100. So, that's very important for you to say sold."

These motor mouths run the gamut from their teens to their sixties with every level of experience in-between. At 15, Lydia Long is the youngest auctioneer in the group.

"You get these people who say, ‘Oh great, here comes this 13, 14 year old, probably not knowing how to do anything,’” she said. “When I start I see the light on their faces. Oh man, here it comes."

The winner becomes the ambassador for the industry in Minnesota for the following year. But when it comes to a passion for their profession, everyone in the room is sold.

"I'm just happy to be here and hopefully I do good," said Young.

At the end of the evening, the winner was Andrew Jossund of Gary, Minnesota.