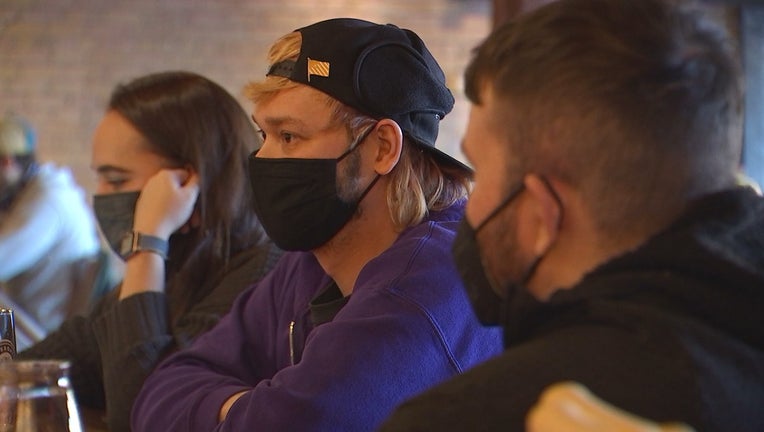 MINNEAPOLIS (FOX 9) - A post-Christmas tradition turned into a tragedy for a group of friends from Minneapolis as a deadly car accident changed the lives of all involved.

"He lived a very content life," says Benja Wuest. "Which is my only solace in it because up until the very moment he was very content."

An annual post-Christmas tradition turned into an unimaginable tragedy for a group of friends from Minneapolis. On Thursday, the community gathered for a fundraiser at Indeed Brewing Company.

On December 27, Brandon Wharton, Jacob Charles Eidem, Ben Wuest, and Sam Wuest were on their way to enjoy some cabin time. Near Hayward, Wisconsin near Spooner another driver crossed the center line, hitting the four friends head-on. Thirty-two-year-old Brandon Wharton was killed.

"There are some things there I don’t want to talk about," says Eidem. "We are lucky to be alive. From looking at the car it’s a miracle we walked out of it… crawled out of it."

Eidem, along with brothers Benja and Sam, suffered severe injuries ranging from a broken hip, internal bleeding, some loss of vision, and the list goes on.

"The helicopter ride is round about what I make in a year on average," says Eidem.

Eidem and Benja are both artists and part-time bartenders at Indeed Brewing Company. Unable to work, and with bills from out-of-network medical care piling up. Indeed has organized for all net sales January 26 to go toward helping their two employees. Every Wednesday, Indeed Brewing selects a worthy cause to benefit through its Indeed We Can program, and the effort has a renewed importance ring to help some of their own.

"We do as best we can for part-time employees when it comes to benefits, 401K, but medical care is always an issue," says Indeed CEO Tom Whisenand. "There’s not as big of a safety net. And when you tend bar, serve tables, the paychecks stop."

"We are happy to see how much they’ve healed.," says event organizer and co-worker Val Schulz.  We are really grateful for the love that’s been pouring out through the community."

Eidem and Benja are thankful for the support as well as the several thousand dollars raised online so far. But what they wouldn’t give to pour one more pint for their friend.

"Learning from Brandon, the most feeling grateful you know? Like we shouldn’t have walked out of that car," says Eidem. "It kinda changes perspective on all the people in my life, family, and friends mean so much more now."

Fundraising pages have also been set up for both Benja and Jacob Charles. Donations made at these pages will go directly to them: