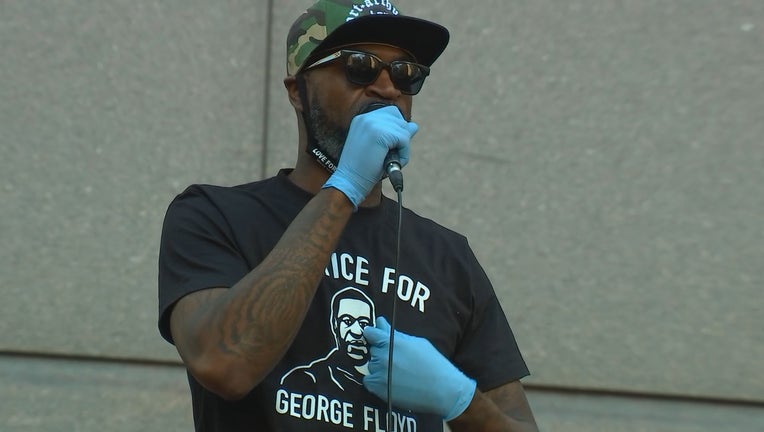 MINNEAPOLIS (FOX 9) - Before George Floyd's death caused an explosion of grief, anger, and unrest, he was a teen growing up in Texas who became friends with future NBA player Stephen Jackson.

The duo was referred to as "twins" because of their similar features and remained friends until Floyd died as a Minneapolis police officer kneeled on him more than two weeks ago. Now, Stephen Jackson wants to make sure his friend's death wasn't for nothing.

Before George Floyd's death caused an explosion of grief, anger, and unrest, he was a teen growing up in Texas who became friends with future NBA player Stephen Jackson.

Thursday, Jackson brought together a rally of Minneapolis citizens, activists, and former NBA players to keep the momentum to bring justice for Floyd.

"All the cameras are gone," Jackson told the crowd. "My brother's buried. There's a lot of people we won't see now. But, I'm still here; I'm not going nowhere. I predicted this. I predicted once my brother's funeral was done, everyone that came around for the photo ops, everyone that was around for the wrong reasons, they're gone now. But, it's a bigger picture. She said all those names and she could have said more names. So, it's bigger than my brother and it's bigger than me."

Protesters gathered on the steps of the Hennepin County Government Center calling for justice for not only George Floyd but the long list of names who lost their lives in police altercations.

"Last time I was here, I saw too many mothers crying, that had no justice, that had no Stephen Jackson to stick up for their sons," he added. "So, I feel it's my duty to not only fight for justice for my brother but to ease these pain for these mothers that never had justice or never had a voice."

Jackson and other speaks made it clear: They want change and they want it now.

"We're not waiting a year for justice," agreed activist Michelle Gross. "There are things they could have been doing along the way. And they have chosen, made the choice, that they care more about sidewalks, and bike lanes, and highways, and whatever, and all this, and fountains, and whatever else -- and not about people and our safety from police violence. That's the choices that they made and now they're trying to worm their way out of it by looking like they are going to do something like disbanding the police but now they are going to have a yearlong conversation about it."

Thursday, state lawmakers announced a package of laws to push changes to policing, police oversight, criminal justice, community healing, and voting rights restoration. The legislation followed a push by the Minneapolis City Council for the complete removal of the Minneapolis Police Department.

Jackson was joined by his former teammate Al Harrington along with his Big 3 coach and former player Charles Oakley. The rally marched through downtown Minneapolis and ended peacefully around 8 p.m.