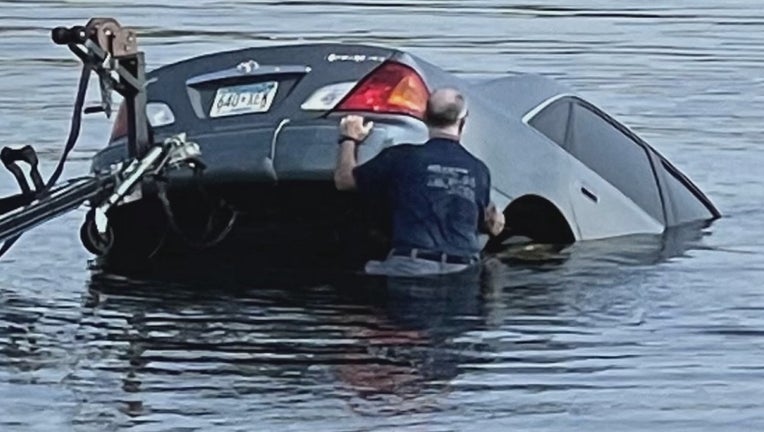 A fisherman ran to the rescue of a driver stuck in a sinking car that went into Lake Minnetonka last week. (Supplied)

(FOX 9) - Three Good Samaritans are being hailed a hero after he came to the rescue after a driver whose car went into Lake Minnetonka and was starting to sink underwater.

"It all happened here on the left side of the ramp," said Dan Fabiano.

A fisherman is being hailed a hero after he came to the rescue after a driver whose care went into Lake Minnetonka and was starting to sink underwater.

Dan Fabiano came to Lake Minnetonka to practice for a bass fishing tournament this weekend. But he ended up doing something much more important than catching a few freshwater fish.

"It's one of those experiences you think about," said Fabiano. "You see it in movies. You dream about it but you don't expect something to happen like this."

Fabiano took a picture of what he thought was a small trailer mishap at the Maxwell Bay public boat launch Thursday morning. But it turned out a car backing a boat trailer into the lake had been pulled into the water and was rapidly sinking with the driver trapped inside as bystanders Zeke Marquez and Justus Larson watched in horror.

"You could see in the car once he got in the backseat there was only like a foot of air and he was pressing his face against the back window trying to get the last of the air," recalled Marquez

"Please God help me," added Larson. "Help me get him out. That's all I was worried about right now."

As the water quickly filled the car, all three Good Samaritans dove in to get the driver out. Fabiano says he was able to reach his arm through a crack in a window and unlock the doors before pulling the driver to safety.

"I said, 'Listen, I got the door unlocked. You are going to take the biggest breath of your entire life right now. I'm going to open the door,'" recalled Fabiano. "When I open the door, you breath in and I'm going to pull you by your ankles."

The Hennepin County Water Patrol says other than being a little shaken up the driver was ok. But Fabiano says his life-saving experience gave him a "fish tale" he will remember for the rest of his life.

"I had a whole bunch of people tell me that today. They said you caught a big one today. Just not the right bass."