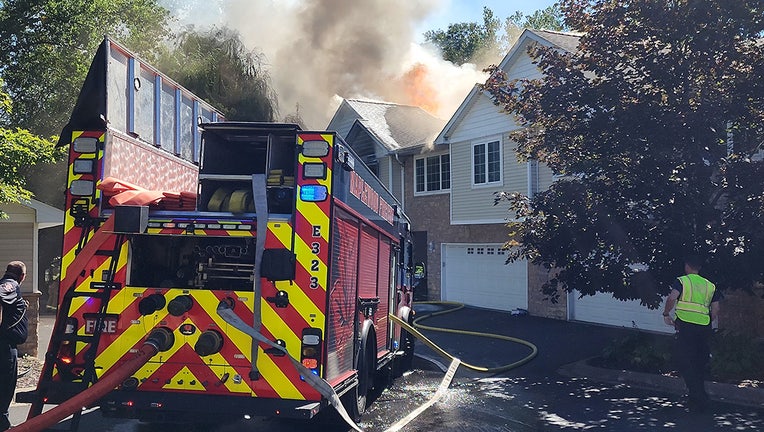 A fire at left a three-plex in Maplewood uninhabitable on Saturday. (Image courtesy of MNCrime.com).

MAPLEWOOD, Minn. (FOX 9) - A fire tore through a three-plex residence in Maplewood on Saturday afternoon, leaving all three units uninhabitable.

Firefighters with the Maplewood Fire Department rushed to the 2800 block of Southlawn Drive at 3:08 p.m. and arrived to find the living room area of the primary unit engulfed in flames, Maplewood Fire Chief Michael Mondor told FOX 9.

The fire had already started to reach another unit, but over the course of three hours, the crews were able to knock down the flames, with no injuries to residents or firefighters, according to Mondor.

Firefighters rescued a cat, though another cat and a dog did not make it, Mondor said.

At one point, a firefighter's foot fell through the floor, but he was able to get out unharmed.

Eleven people from the three units were displaced as a result of the fire. The townhome had working smoke alarms at the time of the incident, according to a press release from the fire department.

Mondor said the cause of the fire is still under investigation.