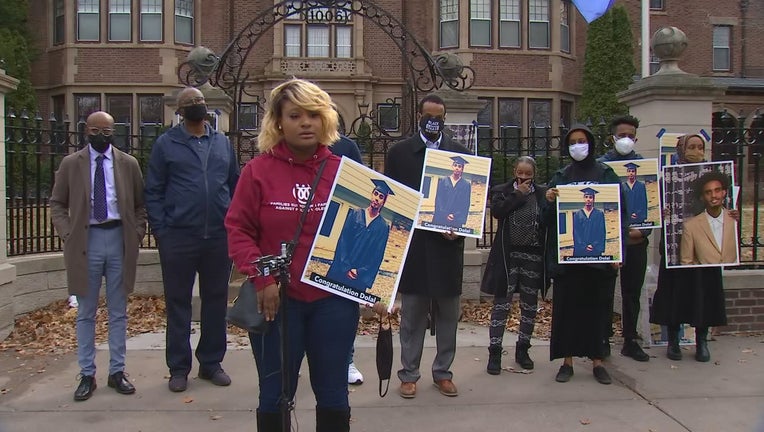 Activists and the family of Dolal Idd rallied outside the governor's residence on Sunday. (FOX 9)

ST. PAUL, Minn. (FOX 9) - Family members of a man killed in a Minneapolis police shooting over the winter are calling on the state to release more videos and appoint a special prosecutor in the investigation into his shooting.

Dolal Idd was killed on December 30 at a Holiday gas station along Cedar Avenue in an exchange of gunfire with police as they attempted to box in his vehicle during an attempted arrest.

Along with body camera video of the shooting, the Hennepin County Sheriff's Officers released a video showing a search warrant being executed at the Idd family home shortly after the police shooting. But, the family wants more videos in the case to be put out.

The family feels the clips released by police only show one side of what happened on the night of December 30. They want all the videos from the shooting to be put out for the public and the raw footage from the search warrant execution. Activists say only then will they know exactly what happened in each case.

At a rally on Sunday outside the Minnesota governor's mansion, the family of Dolal Idd, along with activists and relatives of other people killed in police force incidents, called for more transparency in the case.

"We have so many questions with the governor, with the mayor, and we're never getting any answer," said Idd's father Bayle Gelle

The Minnesota BCA is leading the investigation into the police shooting and the Dakota County Attorney's Office will make the final decision on if anyone will be charged in the case. But, activists are also asking Governor Walz to appoint a special prosecutor for the case.