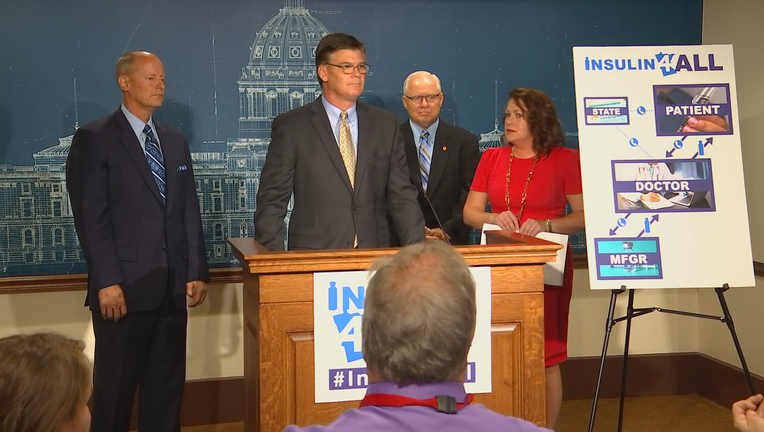 Minnesota Senate Republicans, who have been accused for months of stonewalling plans to make insulin more accessible, on Thursday released a proposal forcing drug companies to give free insulin to Minnesotans who meet certain requirements (FOX 9 Minneapolis-St. Paul)

ST. PAUL, Minn. (FOX 9) - Minnesota Senate Republicans, who have been accused for months of stonewalling plans to make insulin more accessible, on Thursday released a proposal forcing drug companies to give free insulin to Minnesotans who meet certain requirements.

The plan would mandate pharmaceutical companies to provide a 12-month supply of the drug to some diabetics, but does not require companies to pay fees to the state for administration costs. It differs significantly from what House Democrats and diabetic advocates have been seeking, and Democrats are scheduled to release their own proposal a week from now.

Minnesota Senate Republicans, who have been accused for months of stonewalling plans to make insulin more accessible, on Thursday released a proposal forcing drug companies to give free insulin to Minnesotans who meet certain requirements.

The debate has taken on greater importance because two Minnesotans died after rationing insulin, one in 2017 and another this summer. Insulin, a drug that’s been available for 100 years, has soared in price over the past two decades.

The Republicans’ plan would cap income eligibility at 400 percent of the federal poverty level. Pratt said that was nearly $50,000 for an individual and more than $100,000 for a family of four. People must be U.S. citizens or legal residents to qualify for the program.

Republicans said the state would be in charge of determining eligibility. If accepted, a patient’s doctor would coordinate with drug companies for 12-month access to free insulin. The legislation calls for the program to shut down in December 2023.

Walz, who a day earlier blasted Senate Republicans and accused them of working with drug companies, appeared more optimistic for a deal Thursday.

“Gov. Walz is encouraged to see both Democrats and Republicans in the Legislature working to address the lack of affordable insulin in Minnesota,” said Teddy Tschann, a spokesman for Walz. The governor is reviewing the Senate’s proposal, Tschann said.

“While this proposal strives to connect Minnesotans with insurance options that include affordable insulin, it not an emergency insulin program,” said state Rep. Mike Howard, DFL-Richfield.

Senate Republicans unveiled their plan using the phrase “Insulin 4 All,” which is the same hashtag – and nearly identical logo – that insulin advocates have long used. A handful of advocates watch the GOP news conference Thursday and said they were grateful for the proposal.

“It seems like they’re genuine in their attempt to want to work together and want to try to save people’s lives, and that’s our group’s goal,” said Quinn Nystrom, a type 1 diabetic who leads the group Minnesota Insulin 4 All.

Nystrom said she and other advocates were looking forward to a Senate committee hearing on the proposal, which is scheduled for 10 a.m. Monday.

Asked about criticism that Republicans were closely aligned with drug companies, Pratt said his proposal would hold the companies accountable for price increases.

Nick McGee, a spokesman for the pharmaceutical industry group PhRMA, said in a statement that the Senate proposal would create a “duplicative” state-run program that his organization opposed.