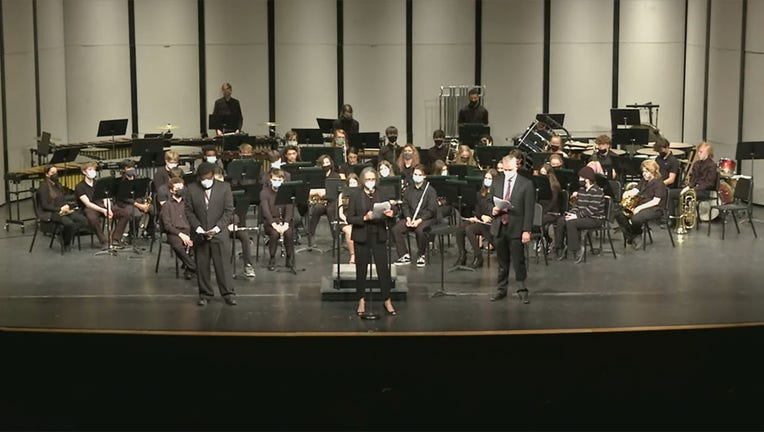 EDEN PRAIRIE, Minn. (FOX 9) - In life, and in death, Jonas Wagner has left a lasting impact on Eden Prairie High School’s class of 2023.

"He was in a bunch of sports, he was a very awesome and really nice guy," classmate Sophia Yoerks told FOX 9’s Babs Santos.

Wagner was at the center of his family’s world for 17 years – until his death by suicide just a few days after his 17th birthday. His passing left their hearts shattered, but the pain was also felt far outside of their home.

"After he passed, there was a sort of tidal wave… it was a big shock," Yoerks said. "It was hard for the school to come back from that."

Jonas played in Eden Prairie’s jazz and marching bands. On Tuesday night the community used a winter band concert as a space to continue wrestling with the loss of one of its own. His classmates and bandmates are working hard to spread mental health awareness around the school.

"Giving the students more resources and more places to go, that’s kind of the biggest thing that we’re doing," Yoerks said. "We’re writing about mental health in the schools, but the main focus is Jonas‘s story."

Experts say that work is now even more necessary, because of COVID-19 pandemic-related isolation.

Jonas Wagner has left a lasting impact on Eden Prairie High School’s class of 2023 after his death by suicide.

"And what that means is increases in depression and anxiety because they’re not able to do what they normally do with friends," M Health Fairview therapist Charlie Puttonen explained to Santos.

If you or a loved one may be at risk of suicide, here are resources that can help.

Trevor Lifeline: Call 1-866-488-7386 for the TrevorLifeline, a suicide prevention counseling service for the LGBTQ community. Trained counselors are available 24 hours a day, 7 days a week. You can also speak with someone over text message or instant message.