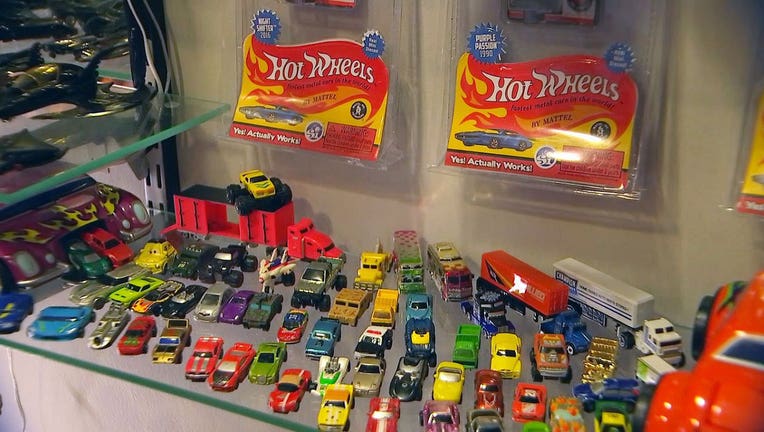 An Eden Prairie man estimates his impressive collection of Hot Wheels and other collectible toy cars is worth over $1 million. (FOX 9)

EDEN PRAIRIE, Minn. (FOX 9) - When you think of Hot Wheels and Matchbox, you might have childhood flashbacks. But an Eden Prairie man started his collection just four years ago when someone paid a debt off with diecast cars instead of cash.

When you think of Hot Wheels and Matchbox, you might have childhood flashbacks. But an Eden Prairie man started his collection just four years ago when someone paid a debt off with diecast cars instead of cash.

There are too many to count but if they’re worth something, Robert Solberg knows it. Four years ago it wasn’t a passion that sent Robert on the road to collect Hot Wheels, Matchbox, Lessney’s and other diecast cars, it was an unpaid debt of just $200.

"He said he had some small cars that he could pay me back so, okay turned out it was pretty lucrative, I got the better part of the deal," Solberg said. "And they turned out to be about 300 blistered packaged Johnny Lightnings."

With those Johnny Lightings, worth thousands, a hobby took off Soilberg's desire to collect accelerated fast. For value, he looked at age, quality and if they were rare. But he also started taking a close look at the tires.

"The red lines are your moneymakers if they’re in good condition they’re worth bucks," he said.

When he came across a vintage pink car, he knew right away he had money.

"If you can find these cars in pink," said Solberg. "You know they’re worth some bucks. Any of these cars. If they’re pink they’ll hold a big value. [Why?] Back in the day, little boys didn’t like pink cars. So when they made them they only made very few of them."

He is so far down the road with collecting now Solberg has pickers that find the cars for him. He sells what is not worth much in bulk to anyone who wants them. But his own personal collection is parked perfectly, lining the walls, sitting on shelves, and tucked in corners.

Just four years after starting his collection, they are all now more than just money. It’s become a lucrative love affair.

"I can come and look at my Lessney’s and go cool," he said. "And actually sit there and look at what I have."

Now, if you’re wondering what’s for sale, it all is -- at least for the right price. Solberg estimates his own collection to be worth $1.5 million.