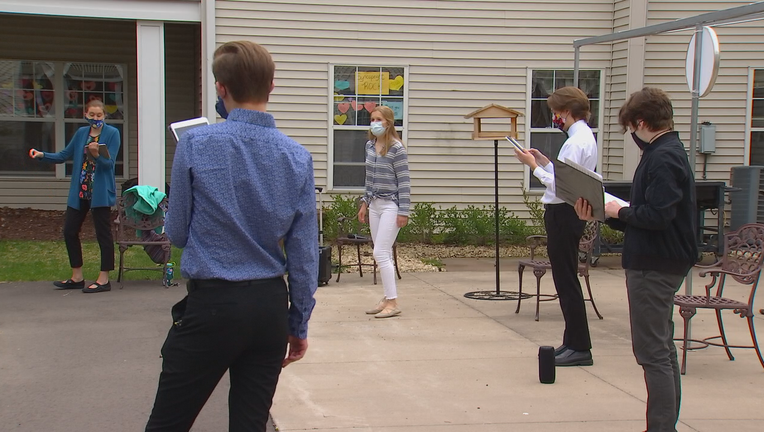 Members of the East Ridge High School acapella group performed for residents at Woodbury Senior Living amid the pandemic. (FOX 9)

WOODBURY, Minn. (FOX 9) - In a courtyard at Woodbury Senior Living, the sound of music fills the air, but this impromptu performance is more than just a mini-concert.

“It means so much to me,” said Carter Bannwarth, an East Ridge High School junior. “It makes me happy to do this. It warms my heart."

It’s a lyrical lifeline to the most vulnerable among us during a difficult time.

The acapella group from East Ridge High School, named Syncopeight, sang for the residents at the facility before the pandemic. After COVID-19 spread throughout the state, they thought a return engagement would be a good way to help the elderly feel less isolated in this era of visitor restrictions and social distancing.

"The outbreak is already stressful enough and to be stuck in place and be vulnerable to it, I think it’s really important to help people when they are stuck there," said Adam Garrity, an East Ridge High School junior.

"It’s a bit of a challenge. Makes it fun to blend with the other people,” said Bannwarth. “It was a manageable issue. It makes everything a bit quieter, but if you can sing loud, sing loud.”

"Our family has to look through windows,” said Charles Velander, a resident at the facility. “I've been eight years in the Navy. I never got tied down like this. That's why this music is great. It’s the best thing we've had."

In the end, by lifting their voices in song they lifted a few spirits as well.

"Seeing the faces of everyone in this home makes me, so happy and it’s just a great feeling to have," said Bannwarth.