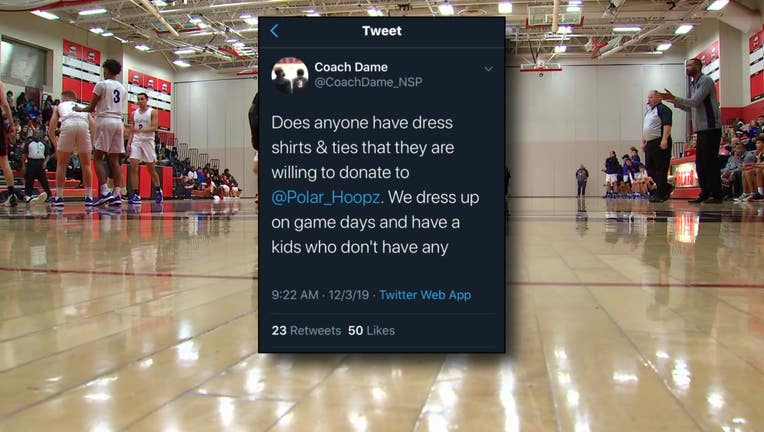 The basketball coach for the North St. Paul Polars asked for donations for dress shirts for his players and received a big response.

NORTH ST. PAUL, Minn. (FOX 9) - A Twin Cities basketball coach wants his players to look good on game days and he's not talking about uniforms. He posted on social media asking for donations of dress shirts and ties for players to wear to school and the response has been overwhelming.

The coach wants all of his players to wear a shirt and tie on gamedays, so he asked the community to donate some. He was stunned with the results.

Tuesday marked the first game of the season for the North St. Paul Polars. Before tipoff, however, Coach Damian Johnson has a dress code for the team that gives a whole new meaning to the term "suit-up.”

"Every day I get dressed up,” said Dallas Williams, a senior basketball player for the Polars. “It’s time to go. It’s money time. We gotta go. It’s here now."

For the last three years, Coach Johnson has required varsity and JV basketball players to wear dress shirts and ties to school on game days. He says dressing up helps the students feel better about themselves and get ready for real life situations like interviews for jobs and academic scholarships for college.

"They feel like they are CEOs at the time,” said Johnson. “So just the opportunity to have that mindset and visualization. You are dressed up, focused and taking care of business."

This year, Johnson wants to extend his dress up policy to the freshmen basketball team as well. He turned to social media to ask people to donate shirts and ties for his players who don't have any. Within a few hours, he'd heard from more than two dozen people offering to send him clothes, money and gift cards, while others dropped off shirts and ties at the school in person.

"We are just appreciative of having so many people in the community help out," he said.

"So now everyone has the same mindset,” said Johnson. “It’s game day. We are all about business. It’s not time to do anything else. We are just focused and getting ready for the game."