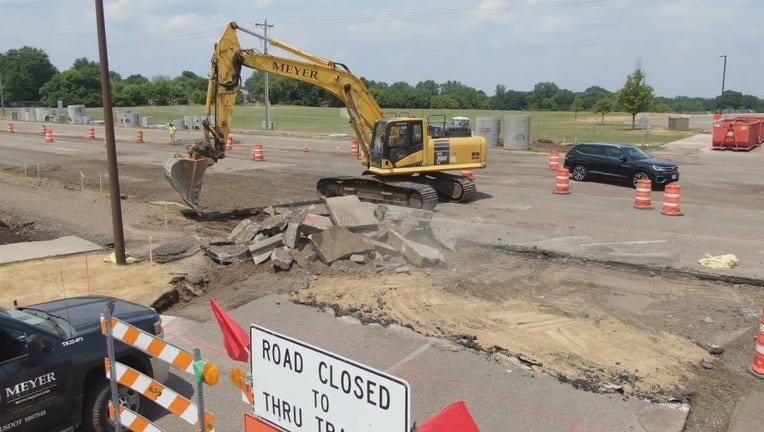 Diffley Road in Eagan, Minnesota is undergoing a major improvement that is all focused around improving safety. (FOX 9)

EAGAN, Minn. (FOX 9) - Summers in Minnesota are filled with plenty of road construction projects, but there's one in Eagan with some extra meaning behind it. Diffley Road is undergoing a major improvement that is all focused around improving safety.

"It was clear that we needed, because of a tragedy in our community, that this needed to happen and it needed to happen fast," said Dakota County Commissioner Laurie Halverson. "You know my colleagues at the Legislature really did respond."

Summers in Minnesota are filled with plenty of road construction projects, but there's one in Eagan with some extra meaning behind it. Diffley Road is undergoing a major improvement that is all focused around improving safety.

Halverson was one of many moved to act after 13-year-old Patric Vitek died on his birthday while crossing Diffley Road in Eagan on his bike on his way to school in the fall of 2019.

"The county roads changed a lot over the 30 years that Northview Elementary has been here and we’re finally going to engineer this in a way that it’s going to be usable for everybody," said Halverson.

Halverson carried the bill as a state representative to get $4 million in state bonding to completely reconstruct the stretch of road. The rest of the $5.3 million total came from the county, city and the school district. When she became a Dakota County commissioner last fall, she helped complete a design fully focused on pedestrians.

"And we want to see more kids be able to walk," she said. "Right now, we actually bus kids from across the street."

The massive project began as the school year ended and it is expected to be completed when school starts in September. It’s decreasing Diffley from four lanes down to two and adds two roundabouts to slow traffic. Through the trees leading to the middle and high schools there will be a new road for buses to ease congestion.

"So the mix of bus traffic and car traffic for families, we’re going to separate that," said Halverson.

The design also adds multiple marked crossings with lights to warn cars, including at the very spot where Patric was killed.

Altogether, the new additions will create a radically different road for students when they return this fall.

"And now they’re going to have an environment that’s built for their safety," said Halverson.