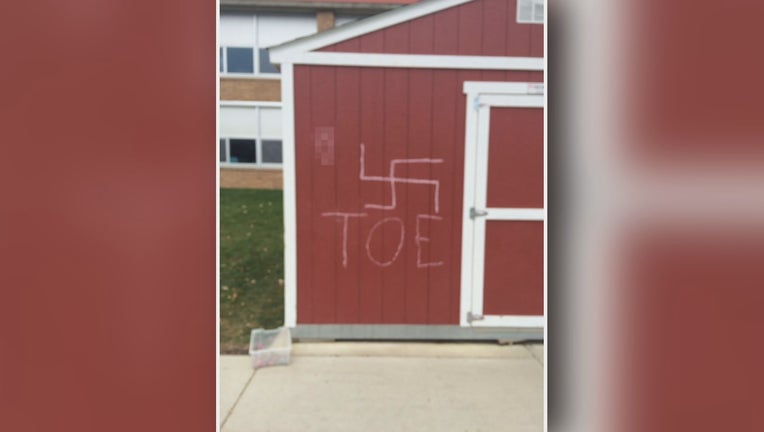 Graffiti appeared on shed at an elementary school in Edina. (Edina Police Department)

ST. PAUL, Minn. (FOX 9) - A swastika drawn at an Edina elementary school has caught the attention of a Democratic state lawmaker who says he’ll lead a push in 2020 to expand Minnesota’s hate crime laws.

State Rep. Frank Hornstein, DFL-Minneapolis, said the state’s laws need to be changed to include more incidents. In Edina last weekend, a teenager confessed to drawing the swastika at an elementary school but wasn’t arrested because the chalk drawing didn’t cause permanent property damage.

A swastika drawn at an Edina elementary school has caught the attention of a Democratic state lawmaker who says he’ll lead a push in 2020 to expand Minnesota’s hate crime laws.

The legislation will also include new training requirements for police about recognizing hate crimes, and seek a new standardized reporting method for bias incidents, Hornstein said.

“We have a significant uptick in hate crimes in the country, and specifically in Minnesota,” the lawmaker said in an interview. “So this is something that’s urgent and we have to respond to.”

Police said the Edina High School student drew a swastika, male genitalia and the letters “TOE” on a shed near Concord Elementary School on Saturday.

The chalk drawing caused no permanent property damage, and police washed it off the shed after photographing it. Police did not arrest the teenager because there was no underlying crime, they said.

"This is obviously not something we condone," Edina Police Lt. Tim Olson said in a telephone interview. He called the incident "disturbing" but said because it didn't damage property, "it's not a crime."

Edina Police said security video captured the incident. The teenager admitted to drawing the swastika during a meeting with an officer and the high school’s assistant principal, police said. The boy said he was not motivated by hate.

Edina Police, city officials, and school administrators have since issued statements saying they do not condone the student’s behavior.

“I think there are some loopholes in statutes that we have to look at, particularly as it relates to property,” he said.

Hornstein said he plans to introduce the legislation early in the 2020 session, but cautioned that it’s not final. Details around the new police training would need to be developed with the state’s policing-standards board, community groups, and law enforcement organizations, he said.

Key players at the state Capitol declined to directly comment on Hornstein’s plans.

But both Attorney General Keith Ellison, a Democrat, and Senate Judiciary Chairman Warren Limmer, a Republican, expressed an openness to exploring the issue.

“We can’t comment until we see all the specifics of it, but in general, Keith has heard around the state that bias/hate-crime laws need to be clarified and enhanced, all while still passing First Amendment muster,” said John Stiles, a spokesman for Ellison.

Hate symbols like a swastika drawn on a public building should be taken seriously, Limmer said.

“The Legislature should consider all actions, as well as dialogue with the community involved, to address these kinds of events,” Limmer, R-Maple Grove, said in an email.