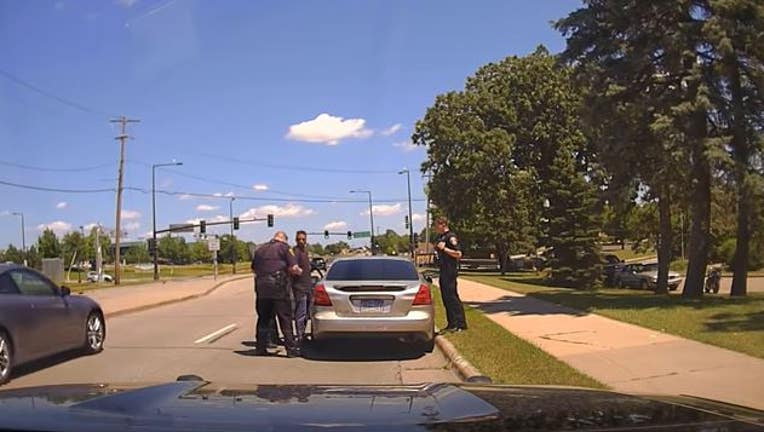 BLOOMINGTON, Minn. (FOX 9) - The Richfield Police Department has released the dash camera footage from an incident Friday in which officers detained a man due what they said say was a “unfortunate case of mistaken identity.”

Authorities say at 1 p.m., a Richfield police officer working traffic enforcement in Bloomington as part of Minnesota’s Toward Zero Deaths Program noted a vehicle was speeding. The officer ran the license plate of the vehicle and saw the registered owner had a suspended driver’s license and a felony-level warrant for his arrest.

Dash cam video was released in a ‘mistaken identity’ stop in Bloomington, Minnesota.

The officer pulled over the vehicle on Old Shakopee Road near Logan Avenue.

In the dash camera footage, the officer is seen approaching the driver, identified as Darrius Strong, with her gun drawn, but held near her thigh and pointed at the ground.

The officer is heard asking, “Are you Darrius?” She asks him about the warrant, asks him to step out of the vehicle and holsters her gun.

In a news release, police said “the officer quickly determined that Mr. Strong was compliant, so she immediately holstered her handgun.”

Two other officers approached Strong’s vehicle as well, but neither had their weapons drawn.

Strong was escorted out of his vehicle, handcuffed and put in the back of the Richfield officer’s squad car.

Police said that Strong was compliant throughout the incident and maintained that there was no warrant out for his arrest.

While examining the arrest warrant and talking with Strong, the Richfield officer learned someone had falsely used Strong’s name during a previous police that resulted in an arrest warrant being issued in his name.

“Shoot…this might be the wrong guy,” the officer is heard saying at one point.
Following that discovery, the officers released Strong and explained the discrepancy issue.

The police departments issued an apology to Strong Saturday.

“This was no doubt a stressful and emotional experience for Mr. Strong. While they were doing their jobs based on what they knew at the time of the traffic stop, officers regret the stress Mr. Strong felt. The three cities will work with the BCA to make sure Mr. Strong’s record is cleared and will continue to have important conversations in our communities regarding police-citizen encounters and how they need to reflect the best of all involved.”

The Richfield Police Department said it would release the dash camera footage of the incident to promote transparency.

Following the incident, Strong took to Facebook Live to share how he thought about George Floyd as he was sitting in the back of the squad car. He captioned the video, “It literally could have been ME.”

Strong described being pulled over, the officer approaching his vehicle with her gun drawn and being put in the back of the squad car.

“This whole time I’m shaking man. I’m thinking like I don’t know what they’re going to do to me when this door closes,” he said. “George Floyd came to my head.”

Strong said Floyd popped into his head again once he learned the felony warrant for his arrest was for check forgery. Floyd died in late May as he was being taken into custody by Minneapolis police officers for a counterfeit $20 bill.

Strong said he felt as though once they discovered it was a case of mistaken identity and released him, the officers had “no sympathy, no empathy for pulling me over with guns drawn on me, putting me in the back aggressively and putting all that into it.”

Strong ended his video saying, “Make sure you’re checking in on your loved ones, check on your friends that are Black, that are traveling in these suburban communities because it could have ended a whole different route.”