MINNEAPOLIS (FOX 9) - Violent assaults at Metro Transit light rail stations are up this year with passengers getting punched, stabbed and threatened.

According to Metro Transit, aggravated assaults, which involve a weapon causing serious injury, numbered 59 by July 31 this year. There were 52 in all of 2018 and 41 in 2017. Some of the assaults appear to be connected to robberies and thefts, which are up 16 percent through October of this year.

Frizell, who’s been on the job for three months, is a former downtown Minneapolis Police inspector, and knows the usual suspects better than anyone.

“I know ‘em by name, know their dob (date of birth) off the top of my head. ‘This guy came off five years attempted murder,’ I know who he is,” he said.

“You have that crime balloon and when you squeeze that proverbial crime balloon you’re going to get it bubbling out somewhere. My experience allows me to predict where that is going next,” said Frizell.

The FOX 9 Investigators examined Metro Transit surveillance video from several violent attacks on light rail trains or stations over the last three years. All the perpetrators were convicted of aggravated assault.

Two incidents from 2017 show how brutal the attacks can be on passengers.

In January 2017, registered sex offender Andrew Lee Walker, was spitting on the train when two passengers confronted him. As the couple left the train, one of them flipped the bird to Walker and he followed them onto the platform at Target Field Station in Minneapolis. After some pushing and shoving, Walker stabbed the man, who was seriously injured. 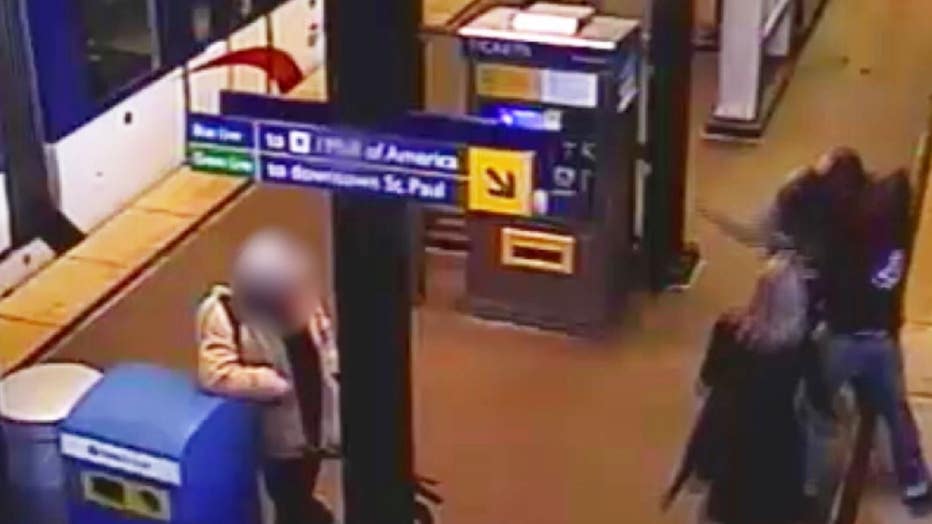 Surveillance video shows the moment Andrew Walker stabbed a light rail passenger who confronted him for spitting on the train.

Flash forward two years later, to January of this year, while Walker was awaiting sentencing for the 2017 assault, he allegedly threatened two more light rail passengers with a knife, one was an elderly woman. Court documents show he was also caught smoking crack on a platform.

In May 2017, at the Warehouse Station in Downtown Minneapolis, Derrick Ryan Casey blocked a passenger who attempted to board the train, then punched him. The passenger lost consciousness and fell backward on the platform with his head landing next to the train. Bystanders rushed to pull him away from the idling train. 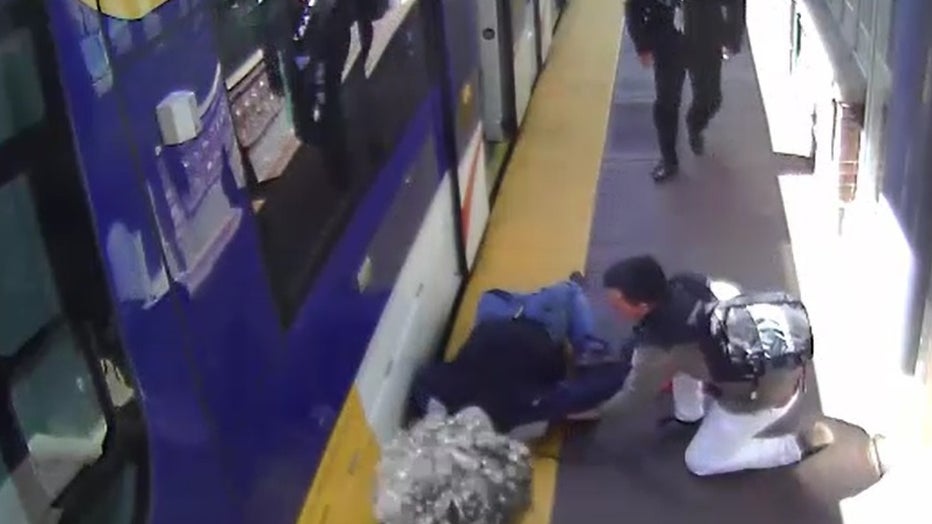 Surveillance video shows bystanders rushing to help a passenger who was punched and knocked consciousness in May 2017 at the Warehouse Station in Downtown Minneapolis. (FOX 9)

In October 2017, there was a murder at the Lake Street Station.

Witnesses told police two men argued over the sale of marijuana and one of them stabbed the other who died minutes later. Frank Runningshield Jr. pleaded guilty to a charge of 2nd degree murder.

From the beginning of this year to July 31 there were 14 aggravated assaults at stations in downtown Minneapolis, nearly three times as many as all of 2018.

But the most dangerous station may be Lake Street, with 19 aggravated assaults closely followed by Franklin Avenue with 16 in the last two and half years. According to law enforcement, the problem at this location is often among the homeless who’ve camped out along Hiawatha Avenue.

On the Green Line, through St. Paul, the trouble spots are the Capitol Station with five incidents, 10th Street with four, Central with eight and the Union Depot with nine in the last two and half years.

Many of the victims of crime on light rail are also appear to be the most vulnerable.

This past summer, Liz Veres and her fiance traveled on the Green Line to the courthouse to get married, when six teenagers stole their cell phones and punched Veres after she attempted to get the phones back.

Both Veres and her fiance have Aspergers.

“It was daylight and it was afternoon, therefore anyone can do anything,” Veres told the FOX 9 Investigators.

At least one of the suspects has been arrested and is charged with simple robbery.

VIOLENCE NEAR THE GREEN LINE

St. Paul Police have attributed a 96 percent increase in gun violence, at least in part, on the Green Line, which runs through the heart of the city.

In a Justice Department grant application this year, St. Paul Police wrote that, “… gun violence is increasingly being committed across city boundaries due in part to the recently opened Green Line.”

OFFICERS AND STAFF AT RISK

In surveillance video,  the officer asks Brown "What are you hiding right there," as he tried to hide the phone under a seat.

A struggle and chase started between the two of them.

He punched the officer in the face, then opened the door and the two of them fell out of the stopped train. Brown punched her a second time, and the officer got up and chased Brown into the night. 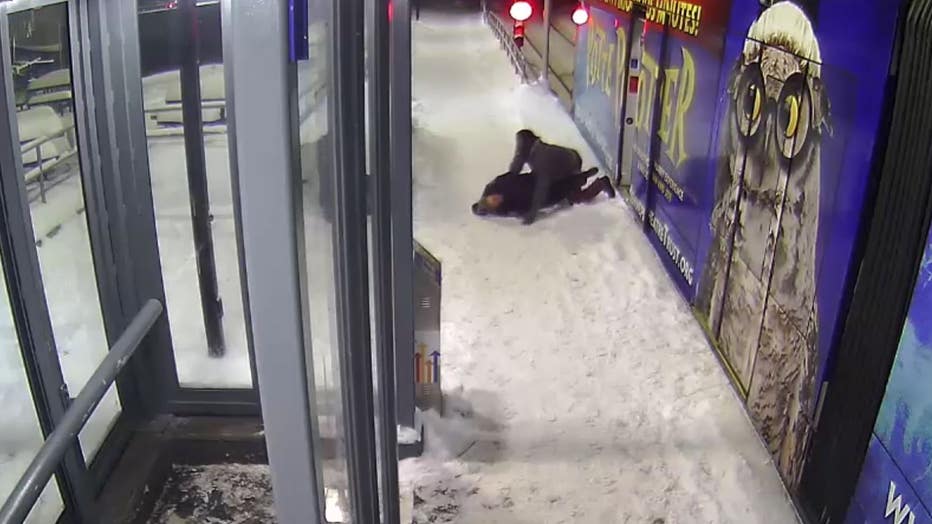 A Metro Transit Police Officer was punched and tackled onto the light rail platform after catching Jerrell Isaiah Brown stealing a cell phone.

A couple train operators have also been assaulted. Their union, ATU Local 1005, is concerned about police presence during the most critical hours.

“They need to be spreading the force out, mainly the stuff is happening in the a.m. rush hour, p.m. rush hour and late evenings. And there’s not a lot of police in the late evenings," said Union Representative, Ryan Timlin.

Given the millions who ride light rail every year, Metro Tansit's police force is relatively small, 141 full-time officers, 50 part-time, and that covers not just light rail, but Metro Transit buses as well.

An undercover producer was offered marijuana joint at the Warehouse Station as two people casually smoked marijuana on the platform for at least 20 minutes.   A photographer witnessed a man urinating just off the station in the middle of the day. Loiterers spent the afternoon on or near the platform.

At U.S. Bank Stadium Station, three hours went by as a group loitered on the platform, a Metro Transit Police officer showed up for a few minutes but stayed on the opposite side of the station.

Chief Frizell points out that loitering on the light rail platforms is not considered a crime.

“Many of those kids look like I did at that age,” he said.

HOMELESS ON THE TRAIN

Other cities, like Phoenix, Seattle, and Charlotte, have hired fare inspectors and security guards as a visible presence at light rails stations and on the train.

In Los Angeles, turnstiles reduce the number of transients and troublemakers on the platforms.

On the coldest of winter nights, as many as 430 homeless seek shelter on light rail or transit stations.

Metro Transit has a homeless action team that hands out clothes and tries to connect the homeless with services and shelter. But many nights the shelters are simply full.

“Our transit system is not a homeless shelter. So, what could we do to provide the services and the opportunities for people to have safe shelter in the cold winter," she said.

They never got to solutions in the two-hour meeting and were not told about the uptick in assaults.